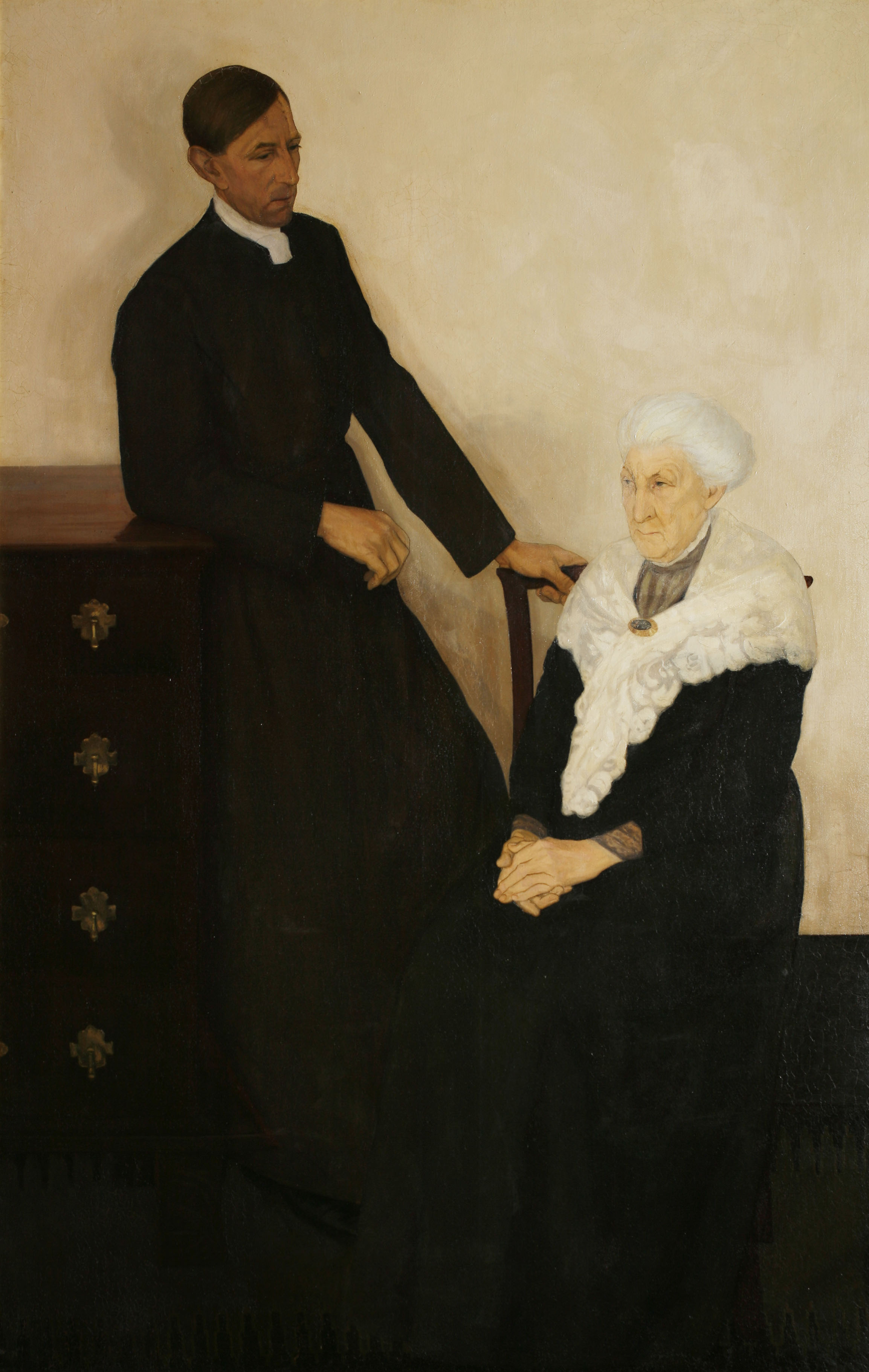 Rev Bernard Walke and his Mother by Annie Walke – currently on display at the Royal Cornwall Museum.

Our fourth blog post for the #5WomenArtists campaign, which was devised by the National Museum of Women in the Arts to promote gender equality during Women’s History Month. You can read more about the project here.

Anne Fearon Walke (known as Annie throughout her life) was born at Banstead, Surrey in 1877. She was one of six children belonging to Edith Jane Duffield Fearon and Paul Bradshaw Fearon. While their father worked as a wine merchant in the West End of London, the siblings were looked after by five residential servants. Annie was particularly close to her sister Hilda, who was born just the year after her and also became an artist.

Annie attended Cheltenham Ladies College, Chelsea School of Art and London School of Art. Her instructors included: Sir William Nicholson (1872-1940), Augustus John (1878-1961) and Sir William Orpen (1878-1931). In the meantime, Hilda joined the Slade School of Fine Art. Upon completing their formal studies, the sisters travelled together to Dresden for additional education. In August 1900, Hilda was in St Ives studying under Algernon and Gertrude Talmage. It is thought that Annie followed her to the South West around 1902 to continue her training as well.

It was in Cornwall that Annie met her husband, the Reverend Bernard Walke (1874-1941). In 1904, Annie moved to Polruan and set up a harbour facing studio in a sail loft. Walke was also in Polruan as a curate. They married in 1911 and Walke was offered the post of Vicar of St Hilary Church in 1912. The couple were close friends with many of the ‘Lamorna Group’ artists, and Walke invited several of them and Annie to decorate parts of the church interior with religious panels and alter pieces.

In St Hilary, Annie fashioned an artist’s studio out of a horse’s stable – bringing in extra light, wooden floors and an exterior garden. She met individuals from the Newlyn School, including Laura Knight, and became a member herself. She was also a member of the St Ives Society and the Royal Society for the Encouragement of Arts, Manufactures and Commerce. Annie frequently painted religious subjects and one of her commissions was the altarpiece triptych for the Jesus Chapel in Truro Cathedral.

When Walke retired, he and Annie moved to a house called The Battery in Mevagissey. Annie rarely painted after 1950 but wrote poetry that was published in 1963. She died aged 88 in 1965 and is buried at St Erth Churchyard, where Walke was also buried 25 years earlier. To date, her work has been exhibited as far afield as England, Paris, America and South America.

There are two pieces by Annie Walke currently on display at the museum as part of the Face to Face exhibition. These are ‘Rev Bernard Walke and his Mother’ and ‘Christ Mocked’, both oil on canvas.

Posted in Uncategorized by Sophie Meyer on March 22nd, 2019.