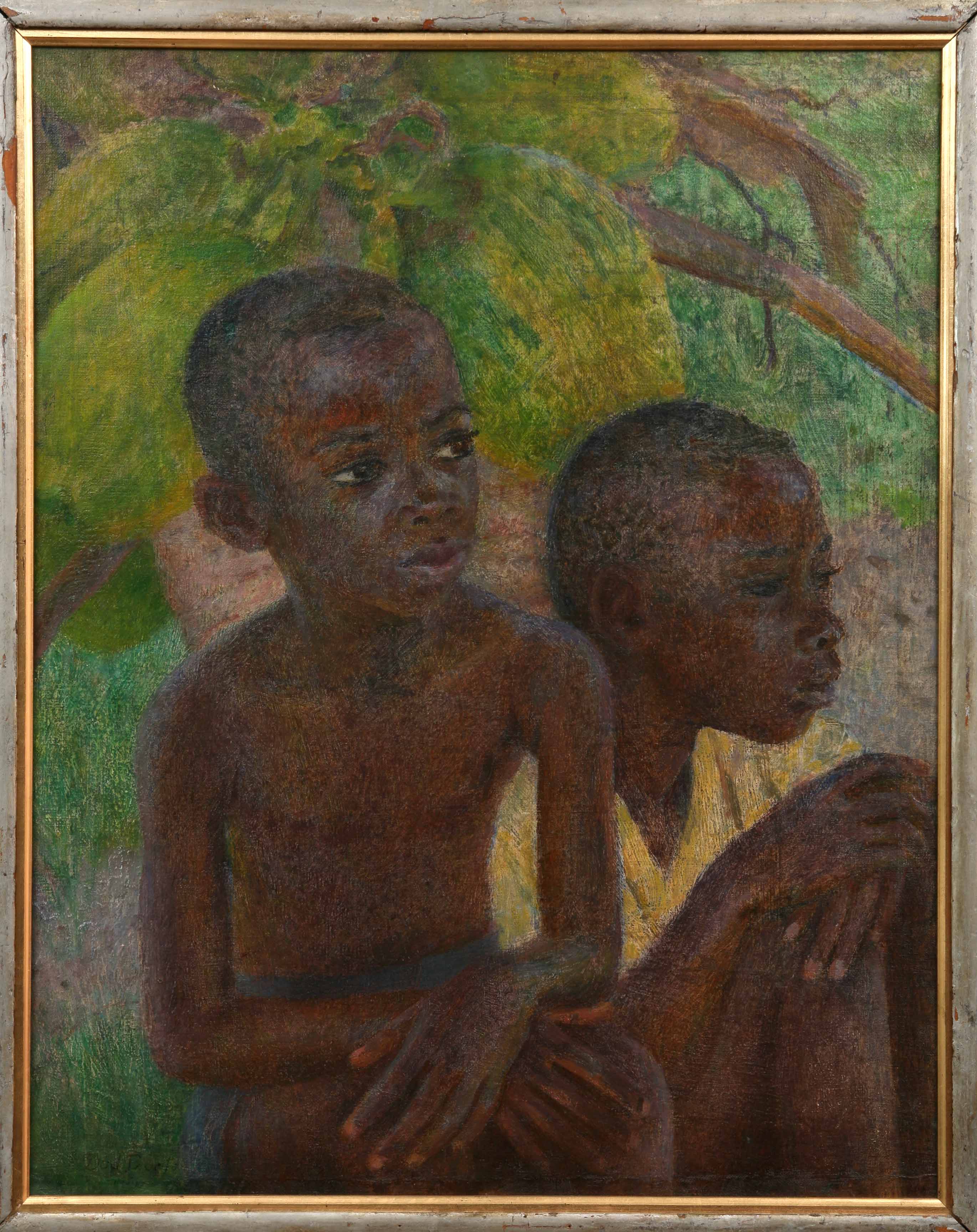 Boys and Coconuts by Dod Procter – currently on display at the Royal Cornwall Museum.

Our final blog post for the #5WomenArtists campaign, which was devised by the National Museum of Women in the Arts to promote gender equality during Women’s History Month. You can read more about the project here.

Doris “Dod” Shaw was born in Hampstead, London in 1890. Her father was a ship’s doctor and her mother was a former art student who had studied at the Slade School of Fine Art. She grew up in Devon and Cornwall, enrolling at the School of Painting run by Stanhope and Elizabeth Forbes at the age of only 15. During that time, the Shaws lived in a large townhouse in Newlyn with two other students – Dod’s cousin Cicely Jesse and another woman artist, Tennyson Jesse.

It was at the Forbes’ school that Dod met her future husband, Ernest Procter. In 1910, she and her mother travelled to Paris, where Dod (alongside Ernest) studied at the Atelier Colarossi. While there, she was inspired by the Impressionist and Post-Impressionist painters, especially Cezanne and Renoir. Dod and Ernest were married in 1912 at the church in Paul, Cornwall. Their only son, Bill, was born in 1913 – the same year that Dod first exhibited at the Royal Academy.

In 1920, Dod and Ernest were commissioned to work on the decorations of the Kokine Palace, Rangoon. The Procters also painted portraits of local people and members of the British colonial administration and created designs for etched crystal. Upon their return to Cornwall, the couple took up residence at North Corner, Newlyn, where they remained for the most part.

Throughout the following decade, Dod concentrated on painting mainly figures. Her most famous work, Morning, was displayed at the Royal Academy Summer Exhibition in 1927 and voted Picture of the Year. Morning was ultimately bought by the Daily Mail for the Tate Gallery collections, which made Dod Procter a household name of the day.

Ernest died suddenly in Newcastle in 1935. Dod subsequently travelled to the United States, Canada, Jamaica and Africa. She returned to Cornwall in 1938, moving to Zennor to be closer to her friend, Alethea Garston. Dod lived in the area until her death, occasionally travelling aboad and often exhibiting in London. The 1930s saw her style change completely as she began to paint in a looser style – the subject matters including landscapes, children and still-life.

Dod was elected a full Royal academician in 1942. She was also a member of the Newlyn School and became President of the St Ives Society of Artists in 1966. She died aged 88, 37 years after her husband. She is buried near him at St Hilary Churchyard.

Dod’s piece Boys and Coconuts (1956) is currently on display at the Royal Cornwall Museum as part of the Face to Face exhibition.

Posted in Uncategorized by Sophie Meyer on March 31st, 2019.