A Look Through Time

The Cornish coastline stretches across 697 km of land. During our two weeks with the Royal Cornwall Museum, we wanted to explore as many places along the county as we could.

Going through the archives we wanted to take comparative images of Cornwall from the past to the present. Over the space of 6 days we travelled to a total of 14 places around Cornwall, from East to West.

On the South coast we went as far as the small town of Lostwithiel. Here we looked at the past image of a major flood that took place in November 1986. The flood was caused by heavy rainfall and a build-up of debris and silt in the leat which runs alongside Tanhouse Road

Moving on to home of the Du Maurier family; Fowey. We stopped off at the Lugger pub. The Lugger was established in 1633, and now after 385 years, the building still has a strong resemblance to the original architecture. 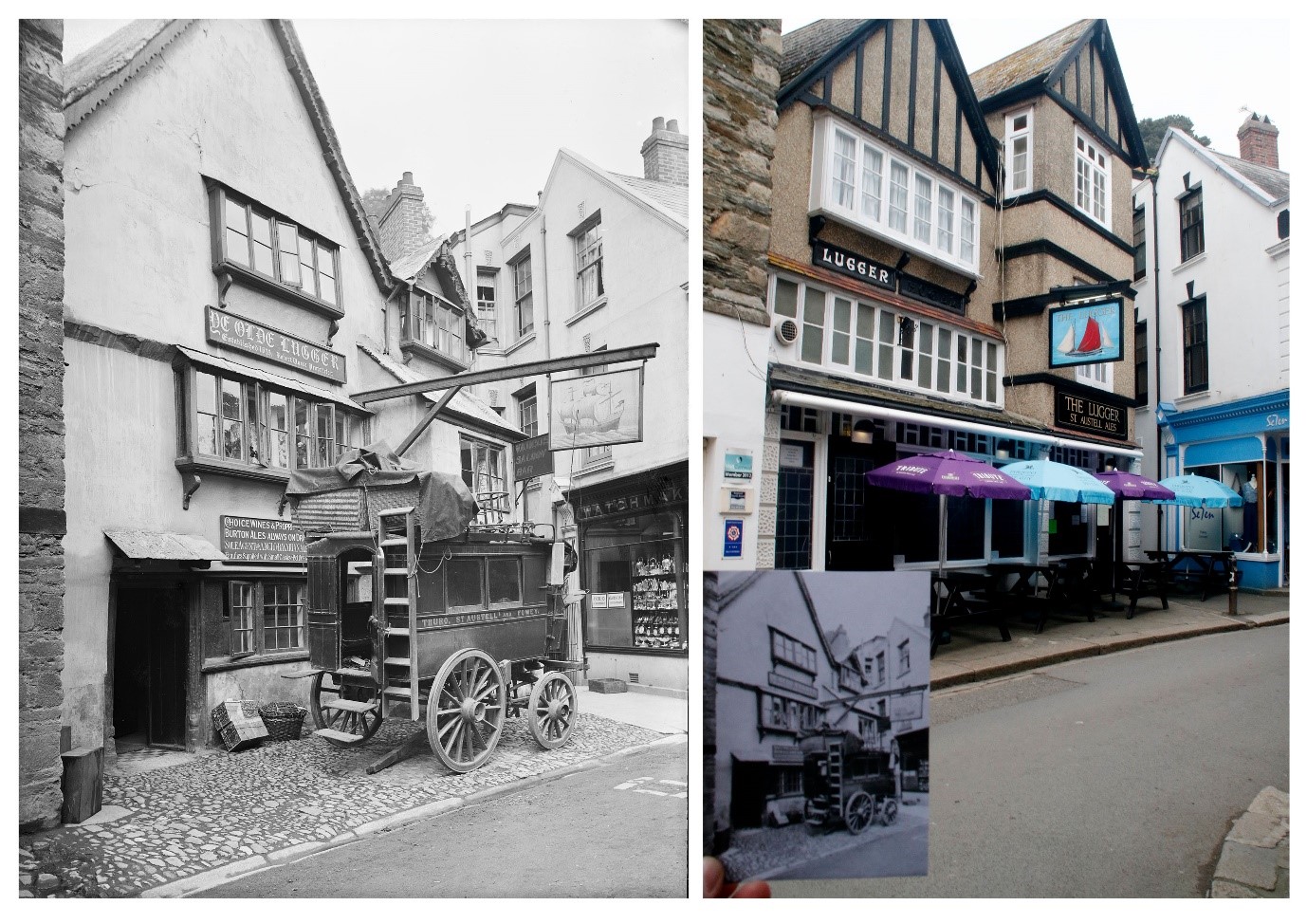 In the small town of Mevagissey we were attracted to the past image taken on the north side of the harbour containing a group of men sat at the bottom of a walkway alongside a washing line. The image is mundane and could have been taken in the present time with no visible change. This made us want to go back and visit the town to see if we could find the location where the men were sitting.

We were able to find the location quickly as it has not changed. The wall where the men are located is now a gift and ice cream shop. 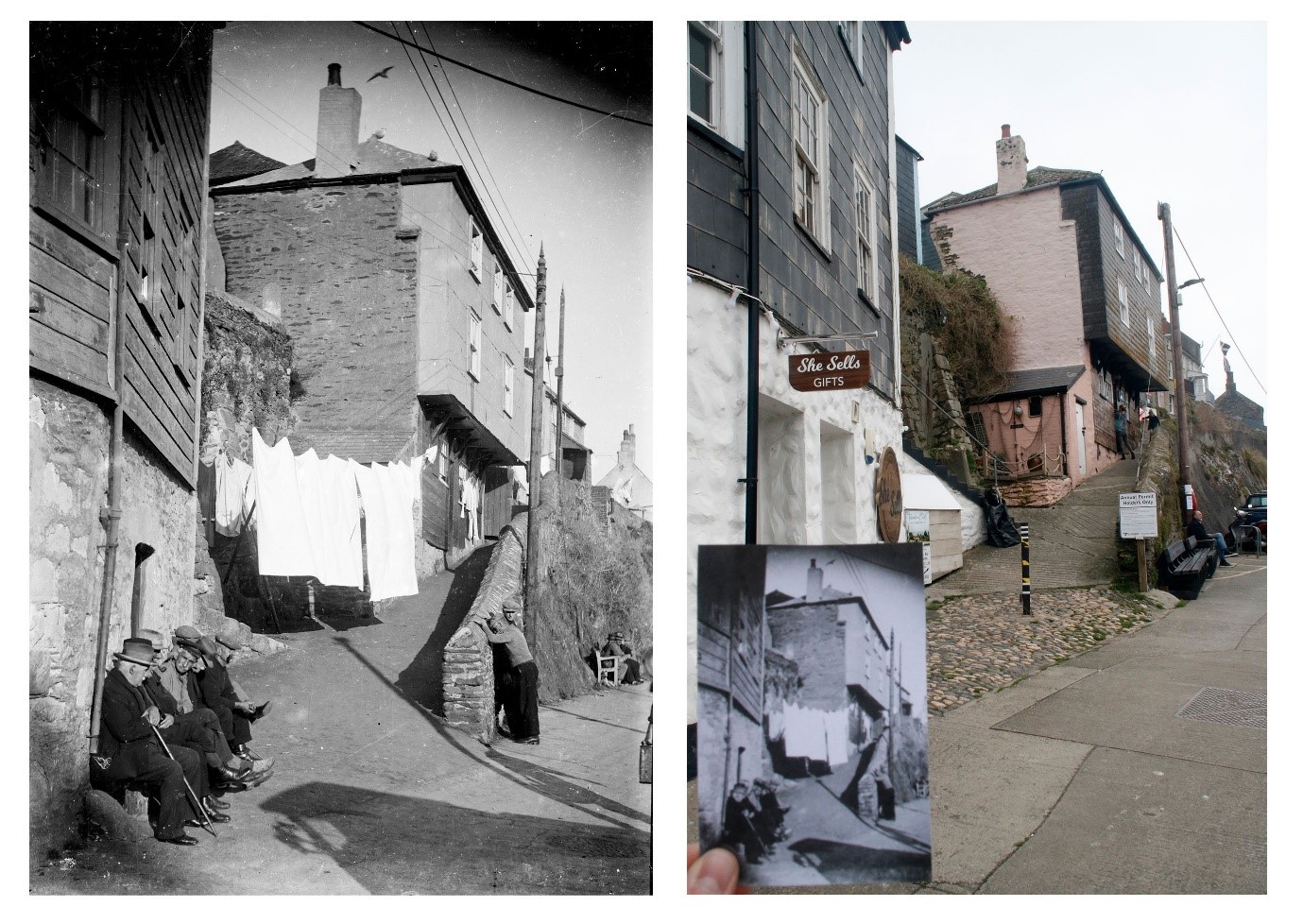 Next, we stopped in Grampound where the former grocery shop, owned at the time by Mrs Annie Curtis, has been converted into a house. The building once boasted a large shop front, and a black mark running across the centre of the house shows evidence of where the shop front once was.

Further up the hill in Grampound, we came across an image that had been digitized of a steam roller crash. This interested us as we imagine that the tenants of the house are probably unaware of the event that happened just outside of the comfort of their home. When returning to the house where the event happened we found the location to be the same other that the paintwork of the house.

We found that St Clement presented a quaint old town, on our visit we found the town to be an exact replica of the image taken in the early 1900s.

The image taken in 1903 shows Truro cathedral in the process of construction. Edward VII laid the foundation in 1880, however the cathedral wasn’t completed until 1910. The cathedral is the centre point of Truro, and can be seen from any point within the city. 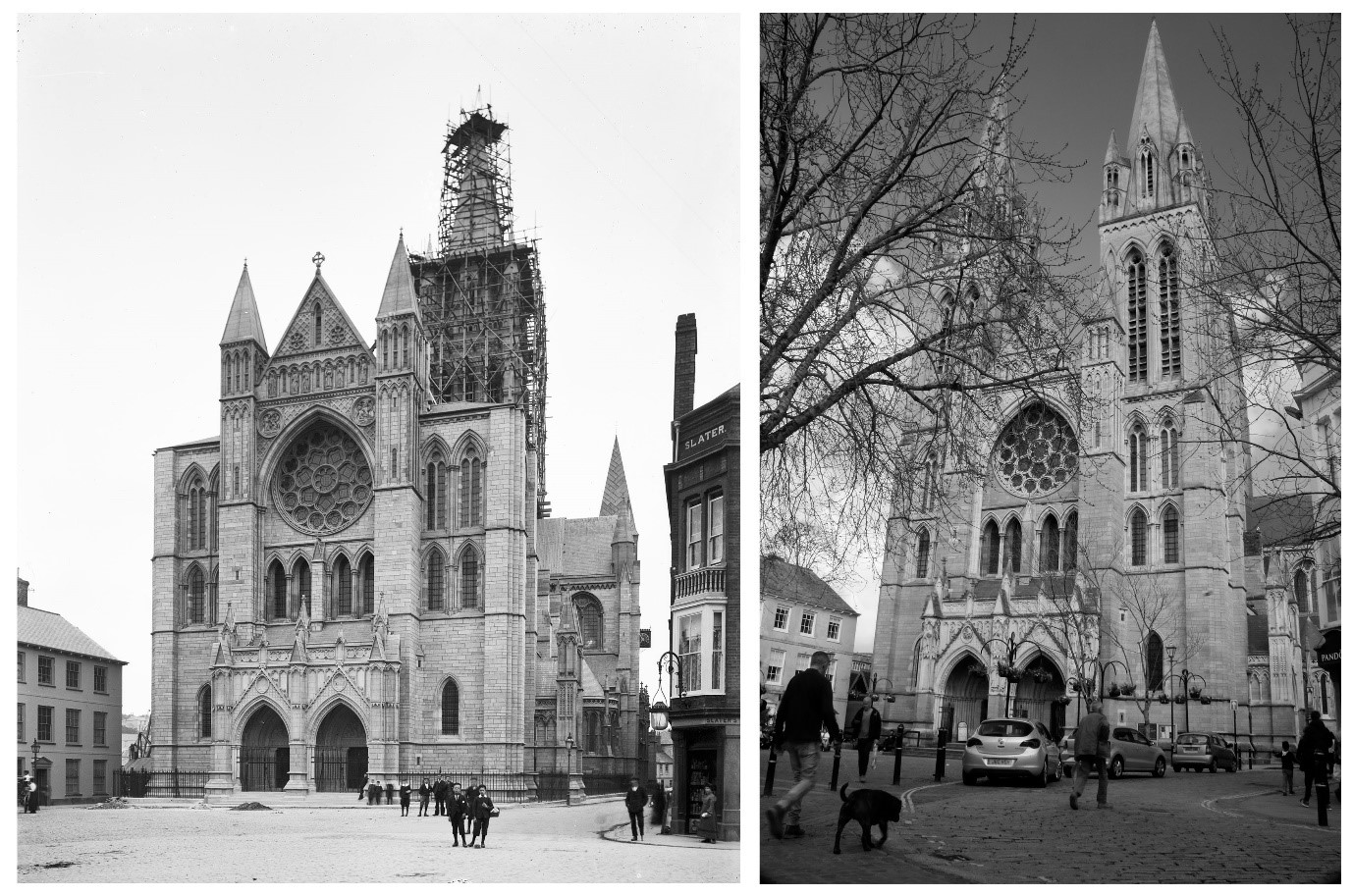 Located on Boscawen Street in Truro we found a playful image of a snowball fight that happened back in 1918. We found this image interesting as if it were not for the digitization of these archive images many people would be unaware of the history of this place and would continue to walk from shop to shop without really thinking of the history behind the streets of Truro.

Moving onto our current hometown. We looked into Falmouth, discovering images of a celebration at the moor. The image is thought to be taken on the 5th May 1905, the date in which the Prince of Wales pier was completed. The foundation was laid in July 1903, by the same prince the pier is named after, who later became King George V. The American forces invaded the pier during World War II and it was later re-opened to the Public in April 1951.

Market Jew Street in Penzance remains mostly unchanged. Home of famous chemist; Sir Humphry Davy who invented a safety lamp for miners, his statue can be seen at the top of Market Jew Street.

Built in the late 1800s for Gracie Thomas, First and Last House is a souvenir shop located at Lands’ End. Built on a cliff the house overlooks the Celtic sea. When owned by Gracie Thomas the house remained a souvenir shop to people entering England, Gracie was known for selling small pieces of granite stamped with ‘Land’s End’. Looking at the dates it can be speculated that the woman in the image could be the owner, Gracie Thomas.

During our time at RCM we had to opportunity to digitise one of the images in the museum’s vast photographic collection, which is estimated to contain around 80 thousand images. This image of the square at St Just in Penwith was the image that we got the opportunity to digitise, so we thought it would be interesting to go and see what the place looks like nowadays.

This image stood out to us as it contains children standing in a courtyard in St Ives. Using Google Maps, we were able to find the courtyard easily. This specific courtyard is located behind the current Fujifilm shop. We can see the courtyard has been changed a little since the image was taken in 1890, but it still bears resemblance to the past.

The popular surf destination of Perranporth is home to the Tywarnhayle Inn. Despite having a new frontage and sign, the structure of the building hasn’t changed since the early 1900s when the original photograph was taken.

There are many images of Treguth Farm on the RCM archives containing people. This interested us, one image in particular that of a girl named Nita Hosking. We found the farm which is now The Treguth Inn, in Holywell. The farm is almost identical to the images from the archive, however the door in which Nita is standing has since been blocked up. 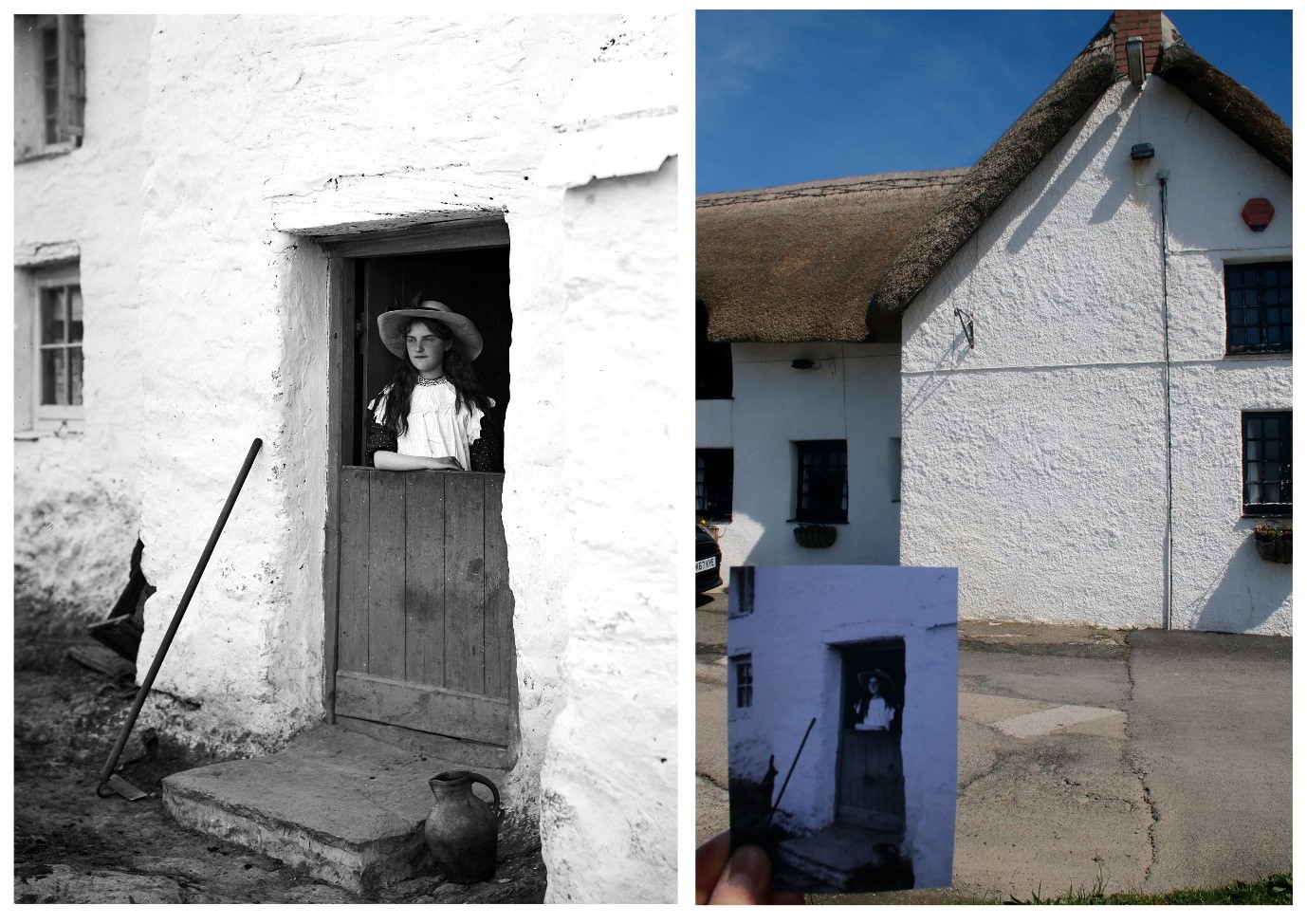 Our last location on our journey round Cornwall was Padstow, The building on the right has changed from the original image which was taken in the early 1900s. 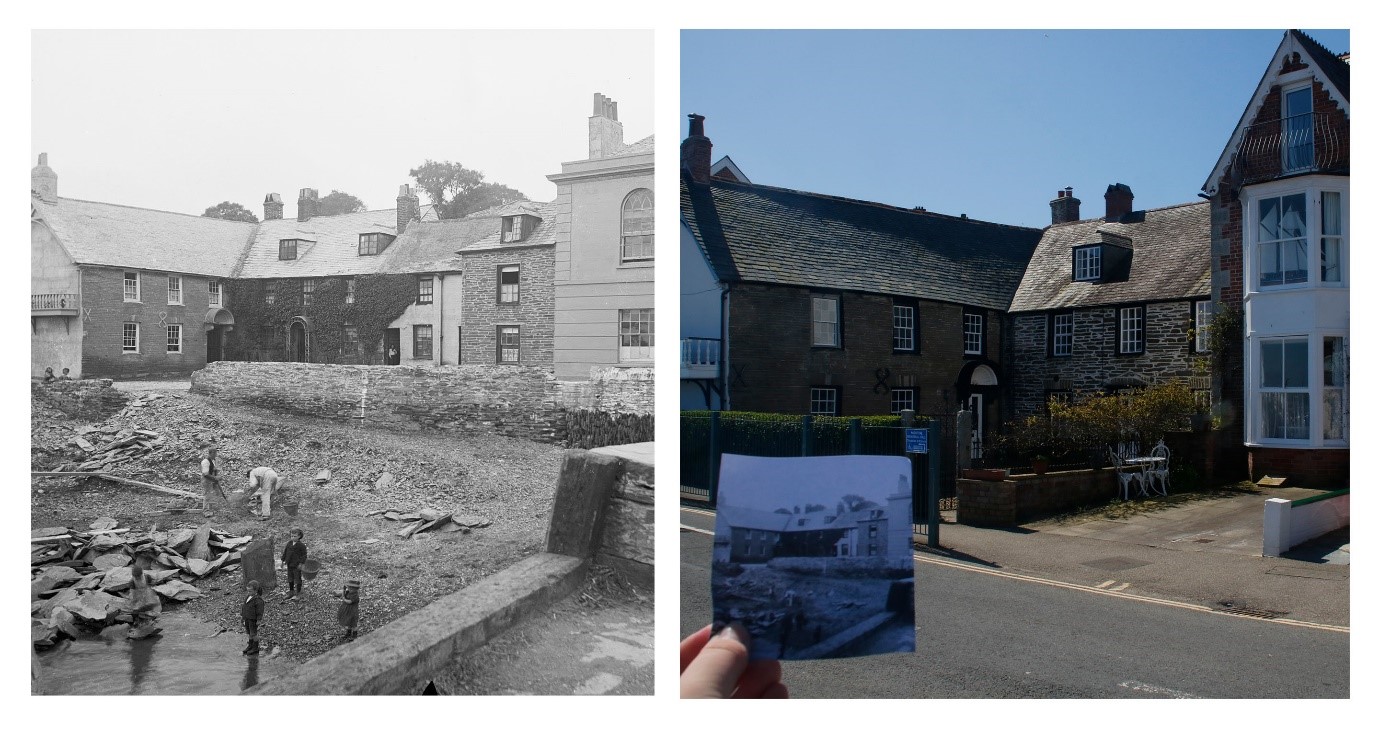 Sadly the sun came out as we finished our tour round the county, but despite this we were able to use our time with RCM as a time to really explore Cornwall and the history behind some of the most popular towns.

We were able to combine history with photography to create a visual representation of past and present. 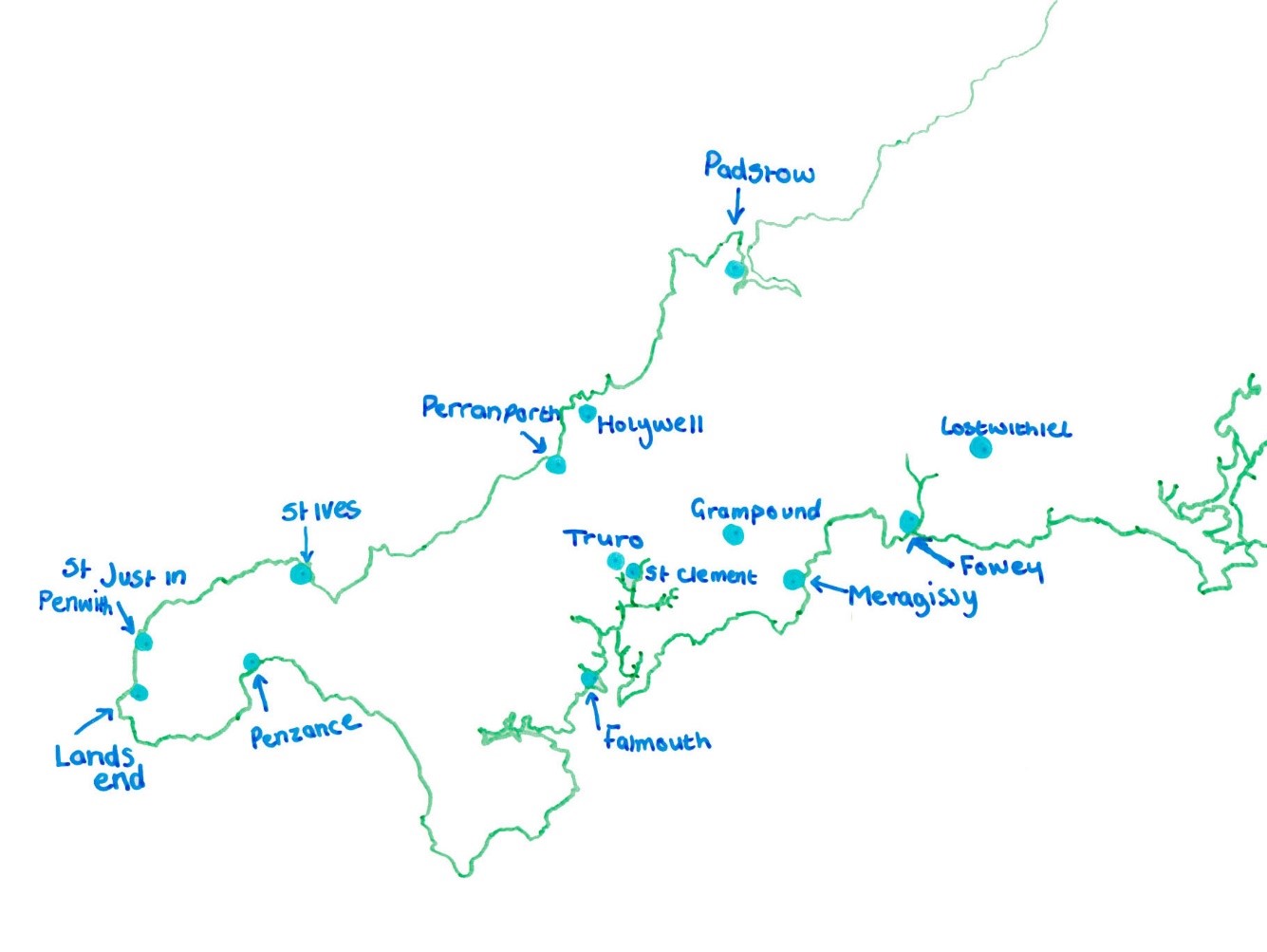