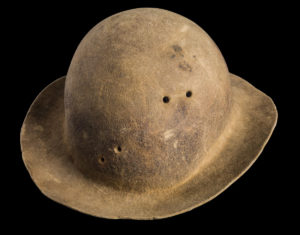 A miner’s helmet of the traditional type, made of felt hardened by impregnating it with resin. . A few of these ‘hard hats’ were in use as late as 1969.

Early Cornish miners wore a felt hat, or tull, which would have been soaked in resin to give it rigidity and strength. While far removed from the hard hats we recognise today, these were among the earliest examples of protective work wear. As well as protecting the head, they also served as a platform to hold the miner’s candle.