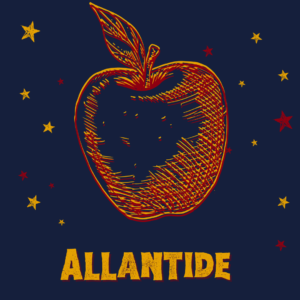 Allantide is a festival observed in Cornwall on 31st October. Considered by many as a version of Halloween, the festival focuses on the apple. Allan markets would be held beforehand selling large, sweet, red apples which were known as Allan apples and gifted to family members to bring good luck. The apples were to be eaten, though children also placed them under their pillow for good fortune or in some cases to encourage dreams of their future spouse.

The festival is thought to have associations with the Cornish or Breton Saint Allan. St. Allan, a 6th Century Bishop of Quimper was celebrated on St. Allan’s Day or the Feast of St. Allan. It is closely related to the Welsh Hollantide and Irish Samain (Samhain) festivals. All of these celebrate the harvest and the closing of the year into darker days. As such there are traditions of divination, mischief, ghosts, bonfires, magic and superstition. Like many traditions connected to Halloween, the coming of winter was associated with death – during the Allantide celebrations, the church bells were tolled to aid the passage of the spirits.

The night of Allantide was used in a variety of ways to divine answers for questions about love. Apples are a symbol of love, fertility and harvest in many cultures, perhaps because apples require at least two trees to pollenate. Single people would throw molten metal into cold water. The shape of the metal was used to divine a future lover – the symbol would show the job they might have, such as a fish indicating a fisherman. Walnuts were tossed into the fire by married couples on the night of Allantide, to ensure fidelity for the year.

Records show that some Allantide traditions were still being carried out in St. Ives, Newlyn and Penzance up until the turn of the 19th Century.

We have hidden some Allan apples around the Museum. See if you can spot them all.