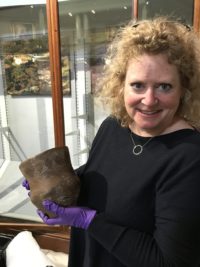 Step into the Royal Cornwall Museum and prepare yourself for discovery. With a brand new layout in the Main Gallery and an easy-to-follow route from pre-historic Cornish finds and stories through to the modern day, there’s never been a better place or time to learn about Cornish heritage.

2018 marks the 200th anniversary of the Royal Institution of Cornwall and Collections and Exhibitions Manager Dr Jayne Wackett couldn’t be more excited about all that’s on offer for visitors of every age. Previously a lecturer in medieval history at the University of Kent, she arrived at the museum just over a year ago and immediately set about creating an interactive experience that’s designed to engage and enthrall.

The re-design makes the most of the architecture and creates a feeling of light and space. Across the floor is a large 1818 map of Cornwall – the first to be developed through trigonometry and therefore the product of both scientific and artistic talent. It’s part of the vinyl flooring so walk on it whilst studying the impressive detail.

The Trewinnard Coach remains a captivating centerpiece. Built in the 1750s, it drew crowds when it first appeared and continues to be a focal point of interest. Jayne has removed the barriers that once surrounded it and, instead, created life-size Georgian characters from across the social spectrum to reflect the different onlookers who would once have gawped at its magnificence.

“I’m hoping children will make up stories about them,” she said. “They represent people both rich and poor from the time that the coach first rode through Cornish streets. It must have been quite a spectacle for everyone watching, whatever their personal lives and background.”

With the aim of inspiring imagination and exciting curiosity, there are a few objects on display that can be handled. Some of these are specially-made replicas and some – including a cannon ball – are real. There are timelines and information about the men and women whose discoveries have advanced scientific progress and touch screen technology means there is plenty of opportunity to find out more in an instant.

Climb the museum’s impressive staircase and find more treasures. There’s a ‘secret life of objects’ store where you can see the difference conservation work makes and try your hand at putting a skeleton together; a gallery that is themed around Cornwall’s strong sense of place; a new cabinet that showcases an 1818 copy of the West Briton and its report of the RIC’s launch; a Poldark’s Cornwall exhibition that will, in the spring, be replaced by local children’s art work and another large gallery dedicated to worldwide wonders.

“Cornwall has made its global mark in many different ways but, thanks to collectors, the world has also come to Cornwall in the last two centuries,” said Jayne. “Before the age of TV and the internet, their adventures meant Cornish people were able to find out about other cultures. Even today, when most of us can tap on a screen to source photos and videos, it’s still a thrill to gaze at exhibits like the actual leg of an extinct giant bird called the moa, marvel at the intricate beauty of an eastern wedding garment and look closely at Lord Byron’s sword. One wall is also covered floor to ceiling with significant works of art in the salon style much used two centuries ago.”

It’s not an exaggeration to say that wandering around the Royal Cornwall Museum is as surprising as it is instructive. From the flint arrowheads of early hominids and Iron Age spindles to Richard Lander’s medicine chest, fine art, dinosaur remains, Bronze Age gold lunula and a mummy, it’s an Aladdin’s Cave of wonder and magical revelation.

Visit and be inspired.