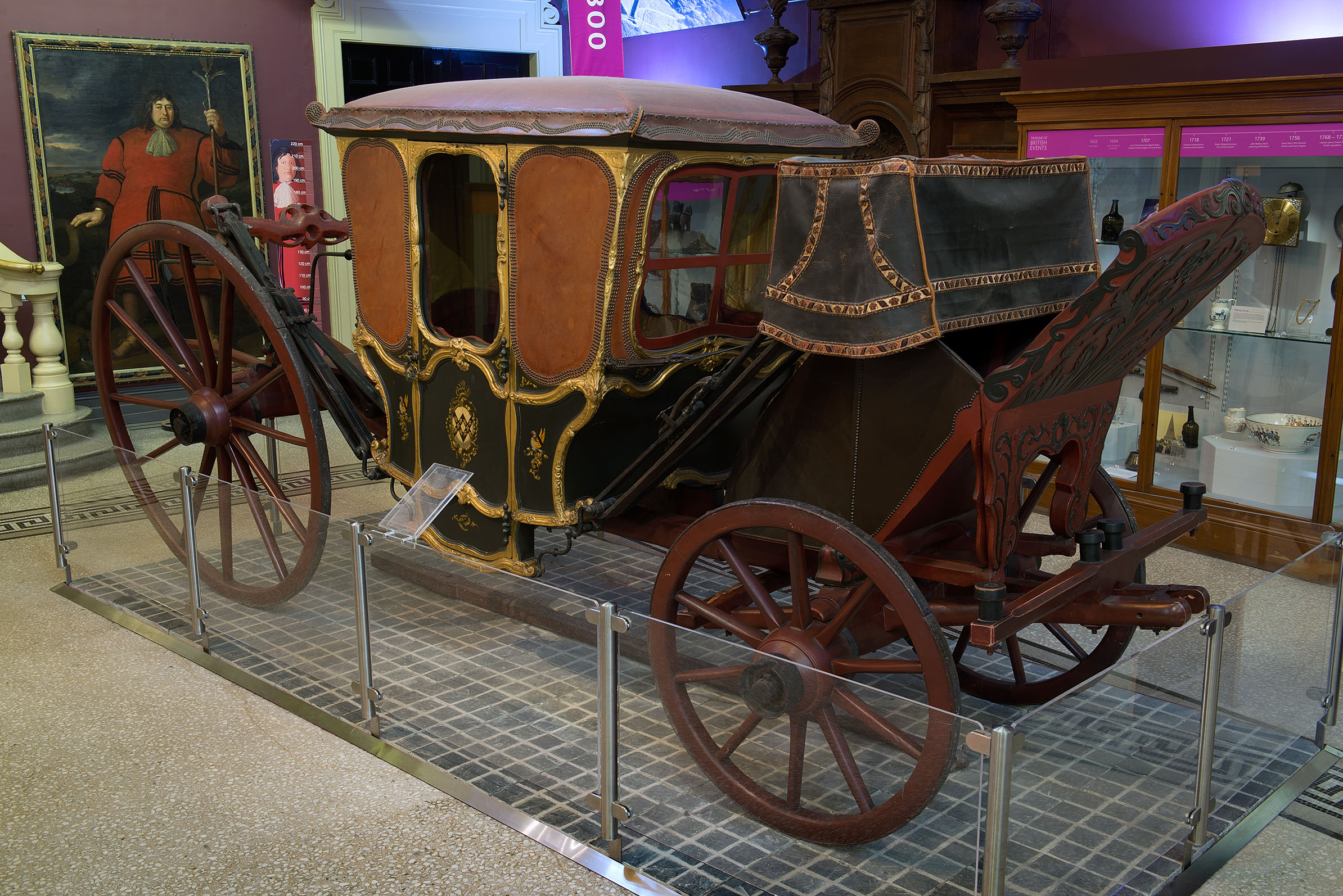 This coach is one of the oldest surviving in Britain today and was a tourist attraction in Cornwall long before the Royal Cornwall Museum acquired it in 1909. It was such a rarity that in the 18th and 19th centuries, sightseers would visit the Trewinnard Estate, St Erth, to appreciate the coach’s grandeur.

Certain features of the coach point to its having been constructed in France, Spain, or Portugal. It is commonly believed to have been commissioned for the private use of the Spanish Ambassador in London, who was then unable to afford the expensive luxury and it passed, temporarily, into the ownership of the Sheriff of London.

In 1750, Christopher Hawkins and his wife Mary moved their family back to Cornwall from London for a better quality of life, and they brought this coach with them, possibly transporting it by sea.

The luxurious Trewinnard coach was an obvious statement of wealth; the 18th century equivalent of owning an expensive sports car. The Hawkins family used it twice on Sundays to go the 3-mile journey to church and back. They had other more practical vehicles for everyday use.

Coaches had long been satirised by 17th- and 18th-century writers, who mocked the upper and upper-middle classes for this extravagant display of wealth. Coaches represented an absurd indulgence when one could easily walk at the same pace, and coach-travel was also believed to lead to laziness.

Maintaining the Trewinnard coach took up 15% of the Hawkins’ household expenses from 1753 to 1757, during which time the Hawkins family spent £400 a year.  The expenditure included the newly constructed granite stables and coach house, purchasing horses, the salaries of the coachmen and stable staff, their livery, and the costs of regular repairs and replaced parts. There was also an annual tax for keeping the coach. The first coachman at Trewinnard was Nicholas Grose; the coachman’s salary rose over a five-year period from 5 guineas per annum to 8, more than the farm manager or local schoolmaster earned.

The last recorded use of the Trewinnard coach was when the chassis transported the body of Mrs Mary Hawkins to her funeral in St. Erth Church in 1780.

The coach fell into disuse and disrepair and needed extensive restoration in 1909 by its Bristol restorers J. Fuller & Co (paid for by the donor, Mrs Hawkins). The coach returned to Cornwall in 1911, where it is enjoyed again by sightseers.