John Couch Adams and a stellar rise to fame 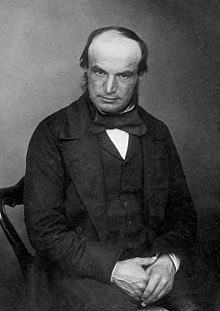 It was 1819, the same year that Queen Victoria ascended to the throne. Tabitha Knill Grylls had married Thomas Adams and given birth to their first child, John Couch Adams. Tenant farmers of very modest means, the family lived at Lidcott Farm, near Laneast, Launceston, and six more children followed.

John went to the village school and quickly proved himself a gifted pupil. His mother had inherited her uncle’s library of books – including several on astronomy – and these became an additional source of fascination and learning. Aged twelve and already excelling at Greek and algebra, John was sent to a private school in Devonport, Plymouth, run by Tabitha’s cousin, the Revd John Couch Grylls. Able to do mathematical calculations easily in his head, the young student’s exceptional talent for numbers was increasingly obvious – even though most of his skill was largely self-taught. Moving on to the Devonport Mechanics’ Institute, John’s education might well have ended there had it not been for a small inheritance his mother received when he was seventeen. Combined with money earned from tutoring, he was able to take up the scholarship offered to him by St John’s College, Cambridge and go on to study for a degree in mathematics.

Whilst effortlessly scooping every prize and plaudit available, John continued looking up towards the stars. Convinced that an as yet unknown planet lay beyond Uranus, he used mathematics to predict its exact location and passed the information on to the Cambridge Observatory. No-one did anything about it until, several months later, French mathematician Urbain Le Verrier came up with similar conclusions and Neptune – which can only be seen through a telescope – was officially discovered. Ultimately both Adams and Le Verrier were jointly credited with finding it – even though many argued that the Cornishman, still in his twenties, had actually got their first.

Quiet and unassuming, John Couch Adams went on to become professor of mathematics at Cambridge University. During the course of a stellar career, he made further huge advances in astronomical science yet, when Queen Victoria offered him a knighthood, he refused it – reluctant to be in the spotlight and content to focus on his work.

John Couch Adams died in Cambridge in 1892 and has a memorial dedicated to him in Westminster Abbey, close to that of Sir Isaac Newton. Neptune’s outermost known ring and a 1996 asteroid are both named after him and The Adams Prize, awarded annually by the University of Cambridge, commemorates his prediction of Neptune’s position.

To celebrate Professor Adams and all the other scientists that have helped put Cornwall on the global map, the Royal Cornwall Museum has created a new ‘Joy of Science’ exhibition in the main gallery. Objects on display also include historical laboratory equipment of the type Adams would have used.

“John Couch Adams was undoubtedly a genius who, from humble beginnings on a farm in Laneast, became one of this country’s greatest astronomers and mathematicians,” said Royal Cornwall Museum director Ian Wall. “There’s a lot to be extremely proud of in our past but the RIC isn’t just about looking after our heritage, it’s about helping to forge our future too through inspiration and education. Our workshops, lectures and activities reflect that ongoing vision.”