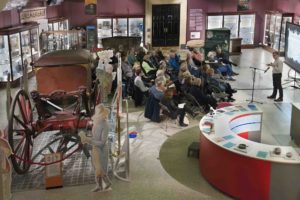 More than fifty people listened to Dr Simon Naylor talking about Cornwall’s scientific past in the first of this year’s Royal Institution of Cornwall’s lecture series.

Providing a history of the RIC’s establishment in 1818 and detailing its early organisational structure, motivations and activities, Dr Naylor examined the Institution’s work and what it has done to develop science locally and nationally. Some of the many examples discussed included the books and papers produced by the Reverend William Borlase, the role societies like the Royal Polytechnic Society in Falmouth played in making science and technological advances accessible to a broader range of people and Elizabeth Warren’s work in collecting plants around her Flushing home and the significant contribution she made to horticultural knowledge on a national scale. The RIC even organised meteorological record-keeping, supplying data that has helped develop weather forecasting.

“The talk was a fascinating insight into how, in many respects, Cornwall has taken a leading role in the evolution of science during the last two centuries,” said the Royal Cornwall Museum’s Collections Development Manager Dr Jayne Wackett. “Whilst we may be a long way from big metropolitan areas like London, our natural environment is a treasure trove of scientific interest and education. We have a huge amount to be very proud of as this lecture demonstrated.”

Dr Naylor is a historical geographer at the University of Glasgow who was born and grew up in Cornwall. He has previously held academic posts at the Universities of Exeter, Bristol and Oxford and is the author of Regionalizing Science: Placing Knowledges in Victorian England.