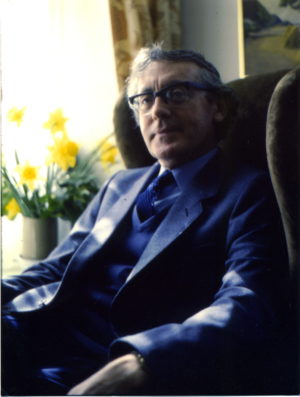 For someone who lived for the vast majority of his life in Launceston, Charles Causley made a very big impression. By the time he died in 2003, aged 86, he’d won a raft of highly prestigious prizes for his poetry, been made a CBE, a Fellow of the Royal Society of Literature and a Cornish Bard and counted the likes of Ted Hughes as a very good friend.

Whilst other prominent twentieth century poets honed their craft in the country’s leading universities, Charles went to Launceston College and, after wartime service in the Royal Navy, trained as a primary teacher in Peterborough. Born in 1917 as an only child, he grew up in a household dominated for the first seven years of his life by the lingering death of his father who’d been wounded in the First World War. He left school to become an office boy at sixteen to help his mother pay the bills and later spent thirty years teaching in his home town.

Charles Causley’s poetry is known for its ballad style, diamond edge clarity and references to Cornwall and its legends. Although he never married, many of his poems were written specifically for children – including one of his most popular ‘Timothy Winters’:

Timothy Winters comes to school
With eyes as wide as a football pool,
Ears like bombs and teeth like splinters,
A blitz of a boy is Timothy Winters.

A highly original writer whose long career is testament to the high regard in which his readers held him, Causley also wrote short stories, plays, articles and even opera librettos. His work lives on in anthologies and educational books for young children but, despite the fame and accolades, he remained a thoughtful, modest man who rarely ventured from the county of his birth.

In 2007, four years after his death, the Charles Causley Trust bought his house -2 Cyprus Well, Launceston – and continues to keep his memory alive through celebrations of his work and active encouragement of new literature in the community and region. The Trust’s patrons include former poet laureate Sir Andrew Motion, novelist Patrick Gale and Lord Paul Tyler.

On Friday 13 April, Patrick Gale will be amongst those paying tribute to Charles Causley at a special event being organised by the Trust at the Royal Cornwall Museum. Joining him in reading selections of the poet’s work will be Story Republic’s Connie Crosby and Olivia Lowry, local writer and storyteller Anna Maria Murphy and writer and teacher Jane Nancarrow who was taught by Causley.

“In the 200th anniversary year, it’s only fitting that the huge contribution Charles Causley made to Cornwall and the arts should be recognised with an evening of readings and storytelling entertainment,” said Museum Director Ian Wall. “We look forward to welcoming as many people as possible.”