During the First World War the main form of communication between the battlefield and the home front, between soldiers and their loved ones was that of letter-writing. According to the Imperial War Museum, the British Army Postal Service delivered around 2 billion letters during the course of the war. Soldiers wrote letters in all manner of circumstance – “…in spare moments, sometimes from front line trenches or in the calmer surroundings behind the lines.”

Fun Fact: In 1917 over 19,000 mailbags full of letters, postcards, parcels and assorted ephemera between those on the Homefront and those on the battlefield crossed the English Channel each day!

What servicemen were permitted to disclose in their letters however, was subject to strict censorship laws. These guidelines were put in place by the government in case post, divulging vital tactical information or top-secret war plans, was intercepted by enemy forces. In practice, though the solider senders often found ways to impart information onto their Homefront recipients. Elsie writes of one such occurrence on 24th November 1915: 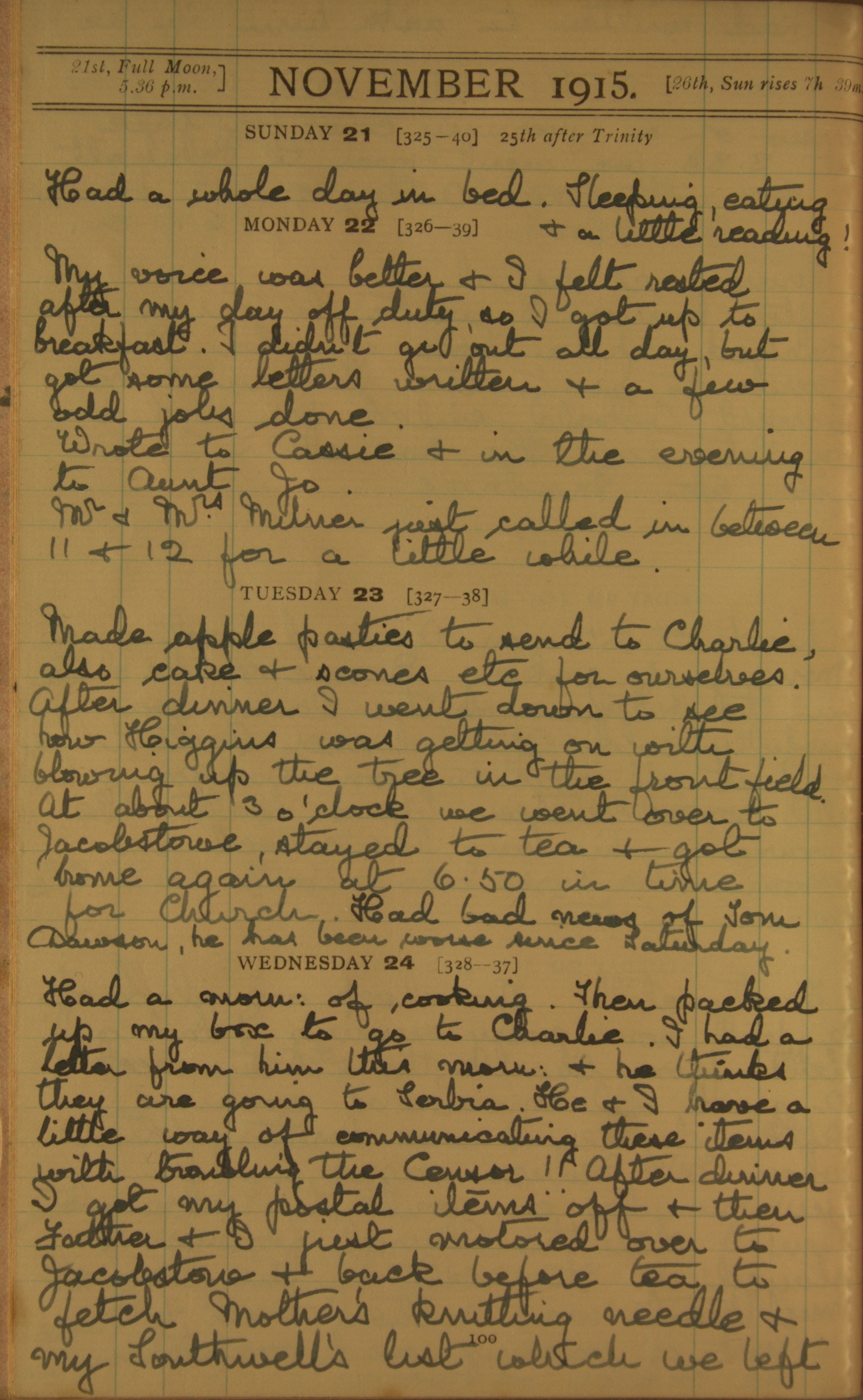 Translation: ‘Had a morn[ing]: of cooking. Then packed up my box to go to Charlie. I had a letter from him this morn[ing]: + he thinks they are going to Serbia. He and I have a little way of communicating these items with[out] troubling the censor!! …’

Elsie writes of another way Charlie deceived the censor was on 13th September 1915. 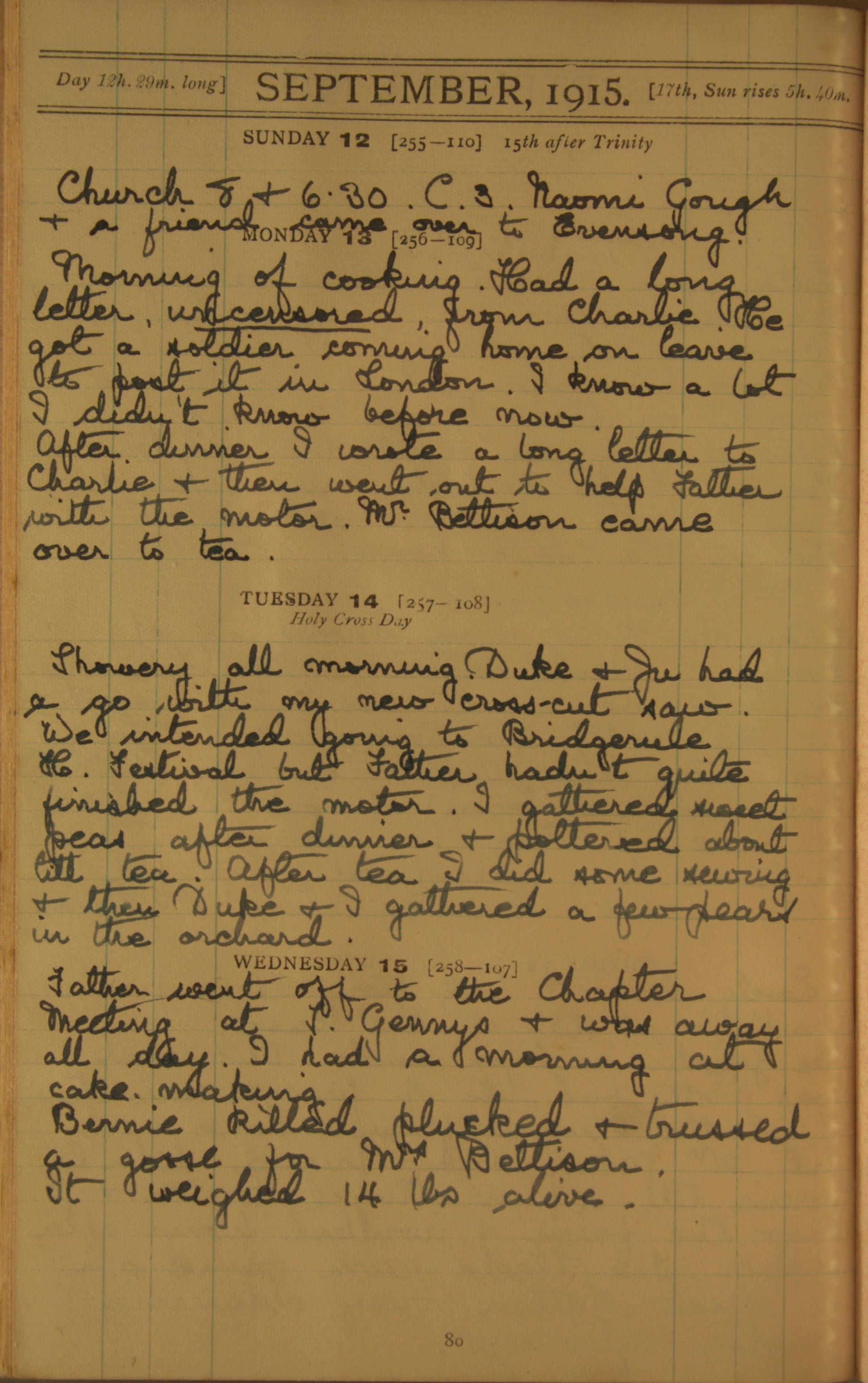 Translation: ‘Morning of cooking. Had a long letter, uncensored, from Charlie. He got a soldier coming home on leave to post it in London. I know a lot I didn’t know before now. …’

Receiving letters, as opposed to sending them home, was vital to the battlefield morale. Receiving letters kept men connected to the homes and the communities, friends and family that they had left behind. Elsie writes to Charlie at several times a week, bakes for him and sends him parcels or ‘box[es]’ whenever she can. 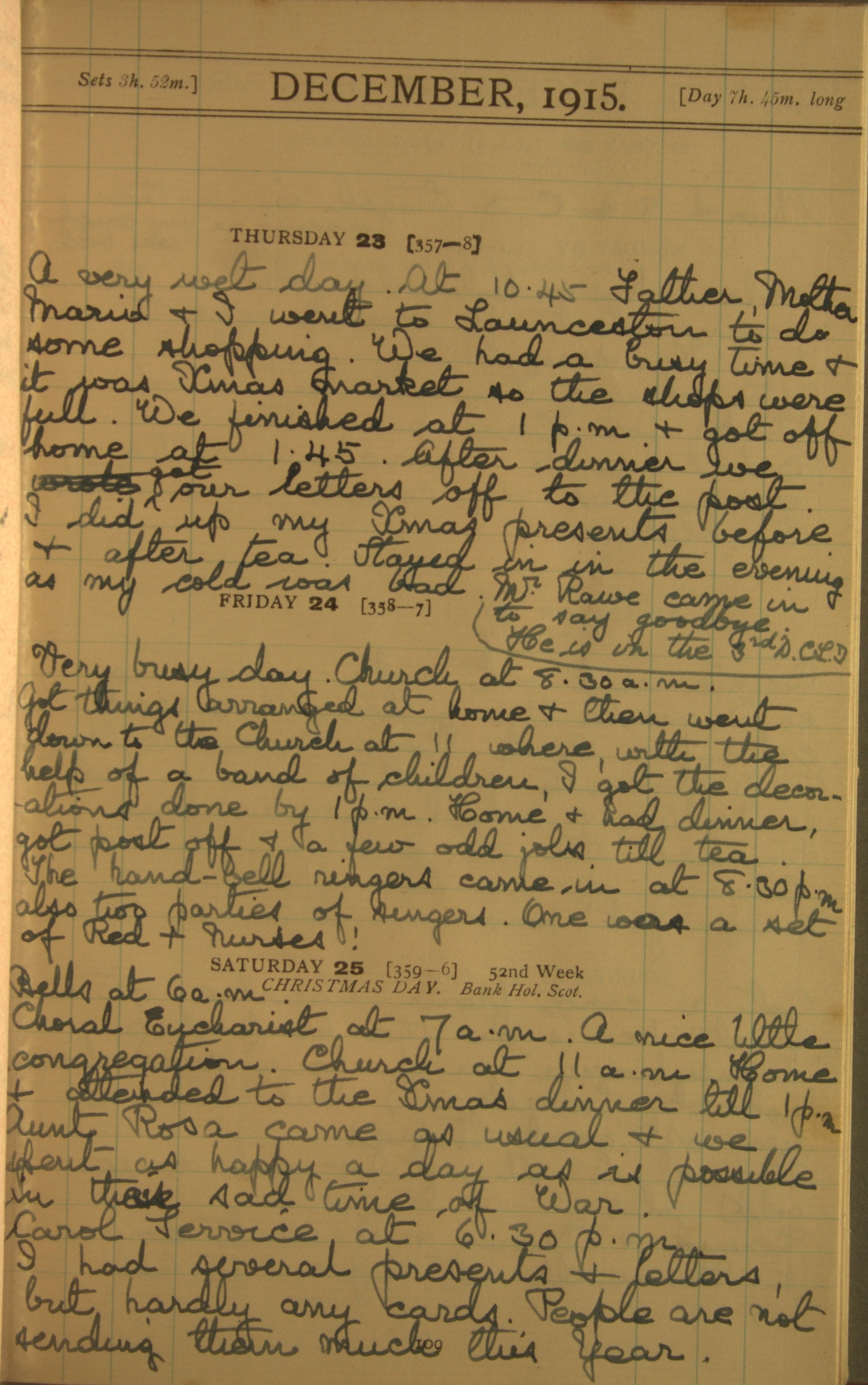 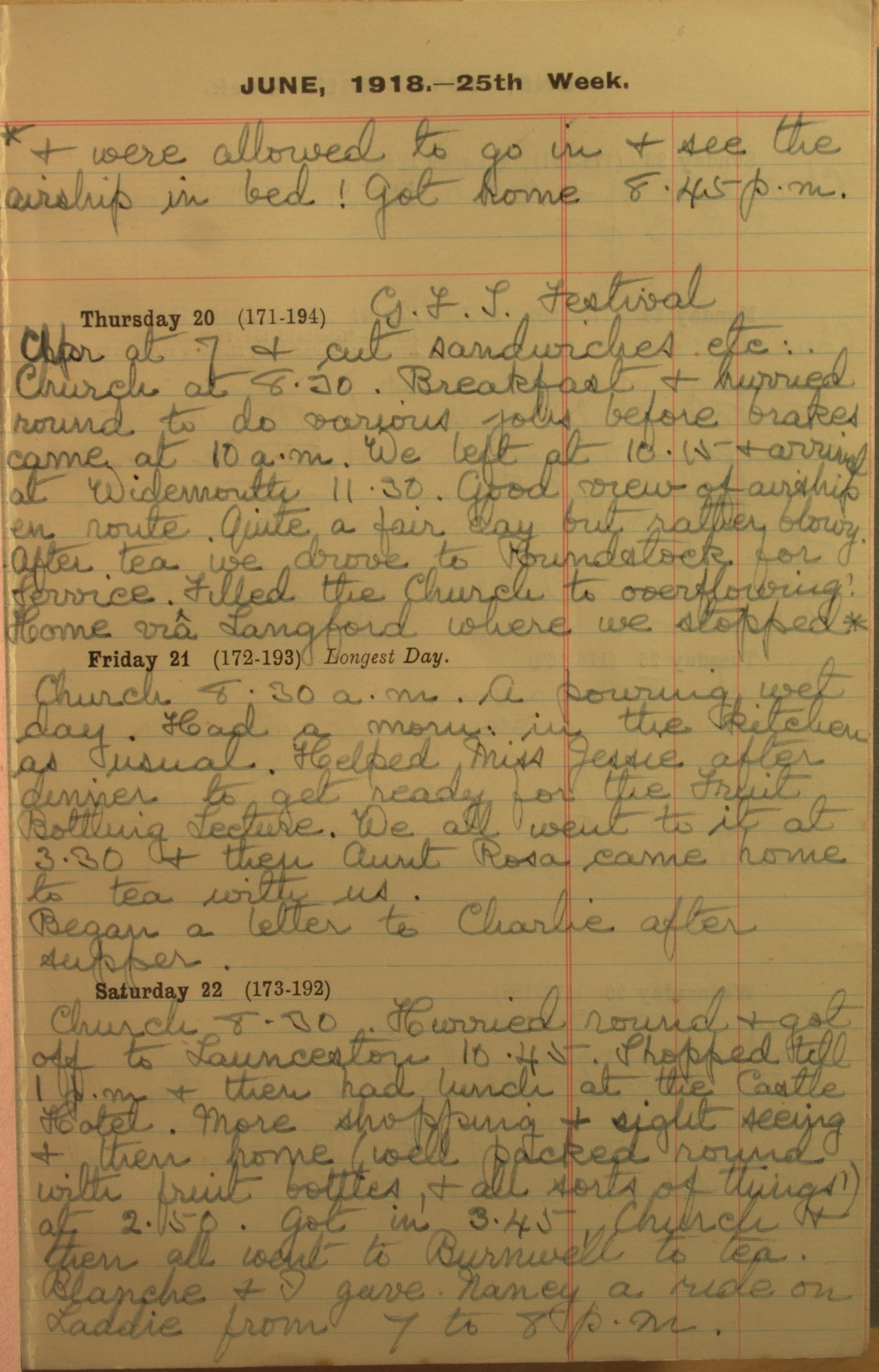 Many soldiers sent home ‘souvenirs’ they had claimed from the battlefield.  Battlefield souvenirs were usually smallish items that could be easily stored on the pilferer’s being. A good example of such an item are the buttons sent to Elsie from Leo.

Some souvenirs on the other hand were turned into ‘trench art’. 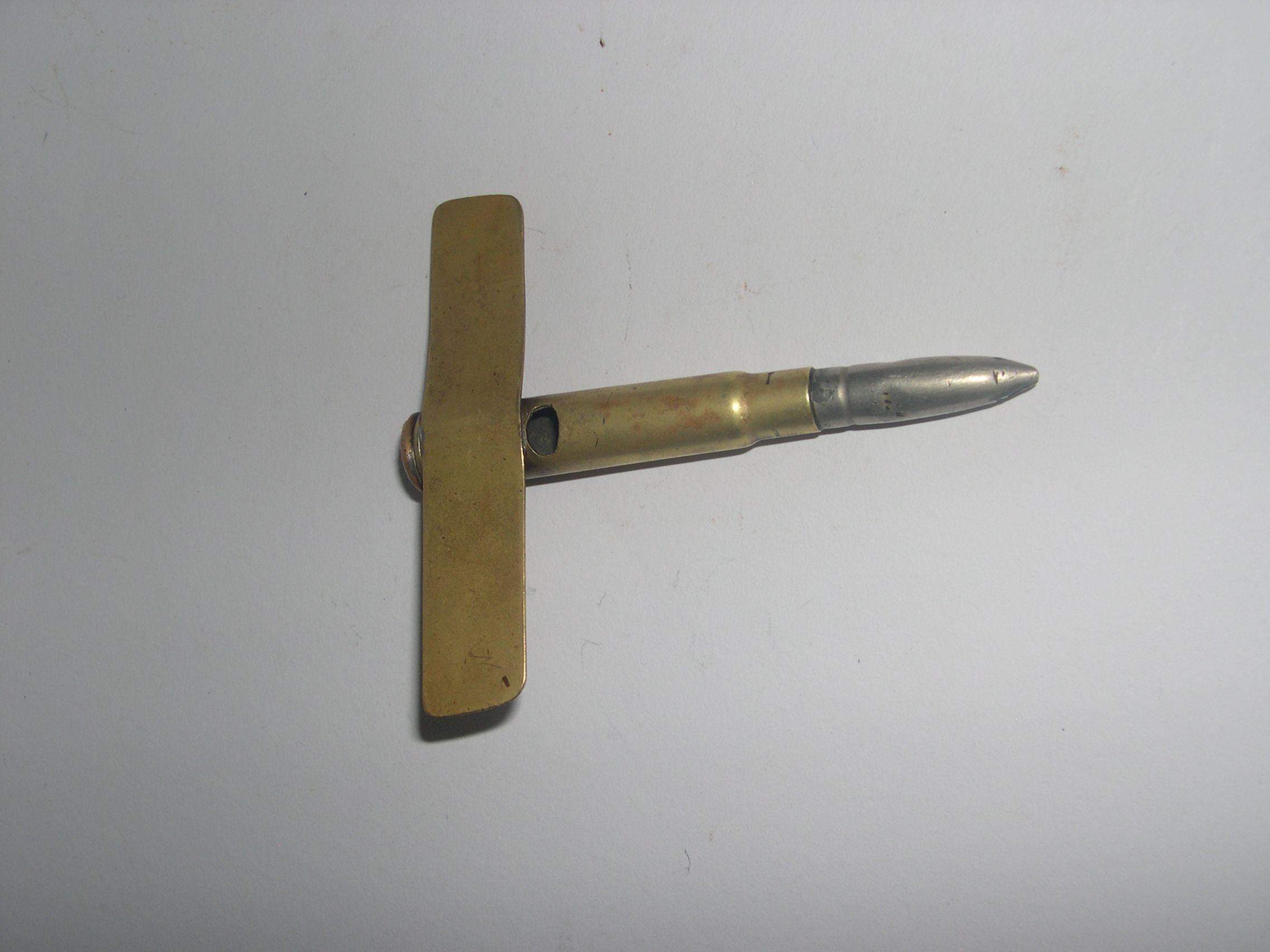 © From the collection of the RIC. Small whistle made from a bullet and battlefield shrapnel remnants.

One such object – a bullet whistle (see above) – can be found in the Royal Cornwall Museum Collection, but Elsie also describes another sent from Charlie. 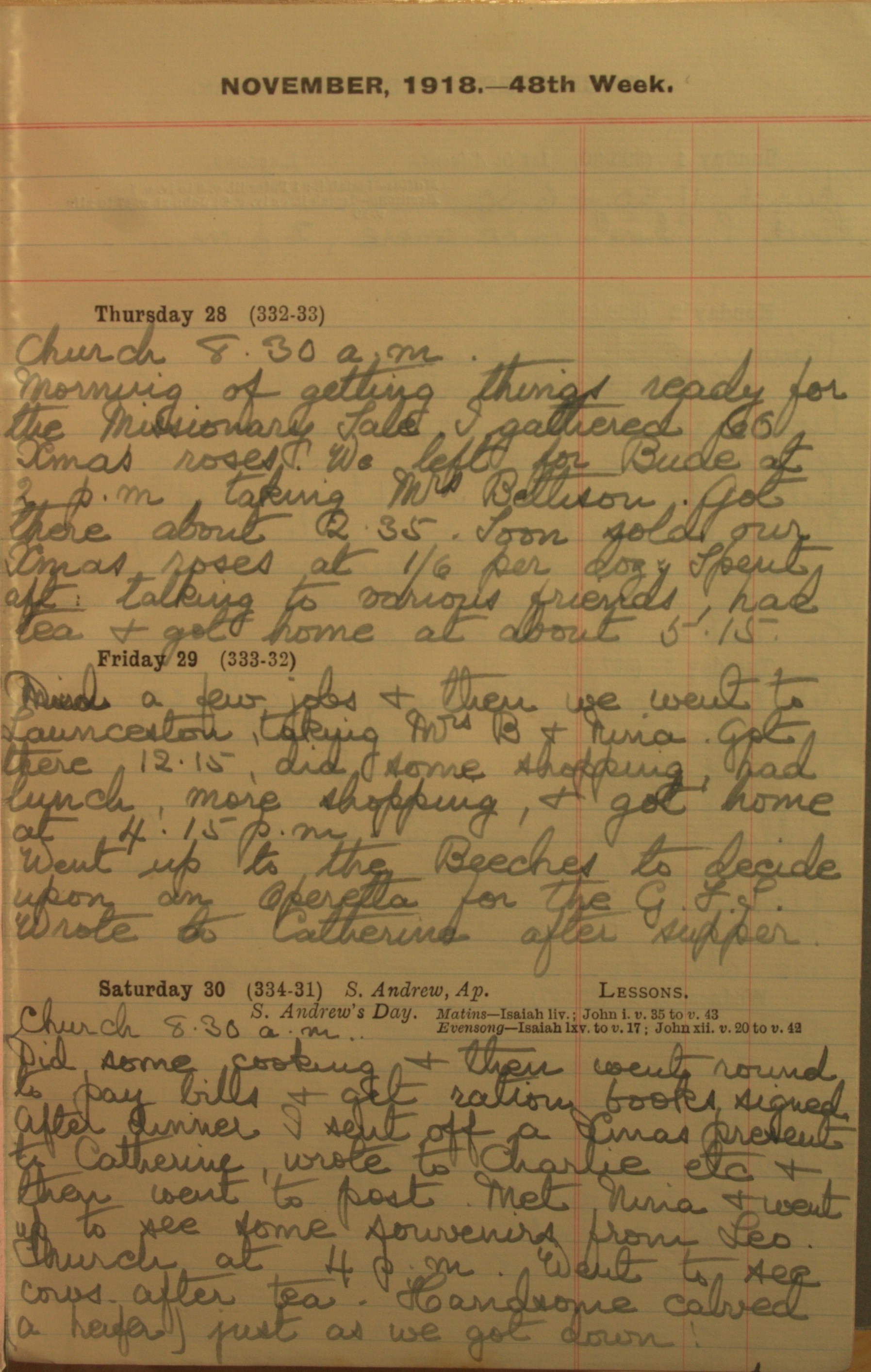 12th November 1915: Translation: ‘…Had a letter from Charlie + a French + English bullet souvenir which he made in the trenches…’