‘The Place of the Missing No. 3. Potocari, Bosnia’ by Phil Whiting 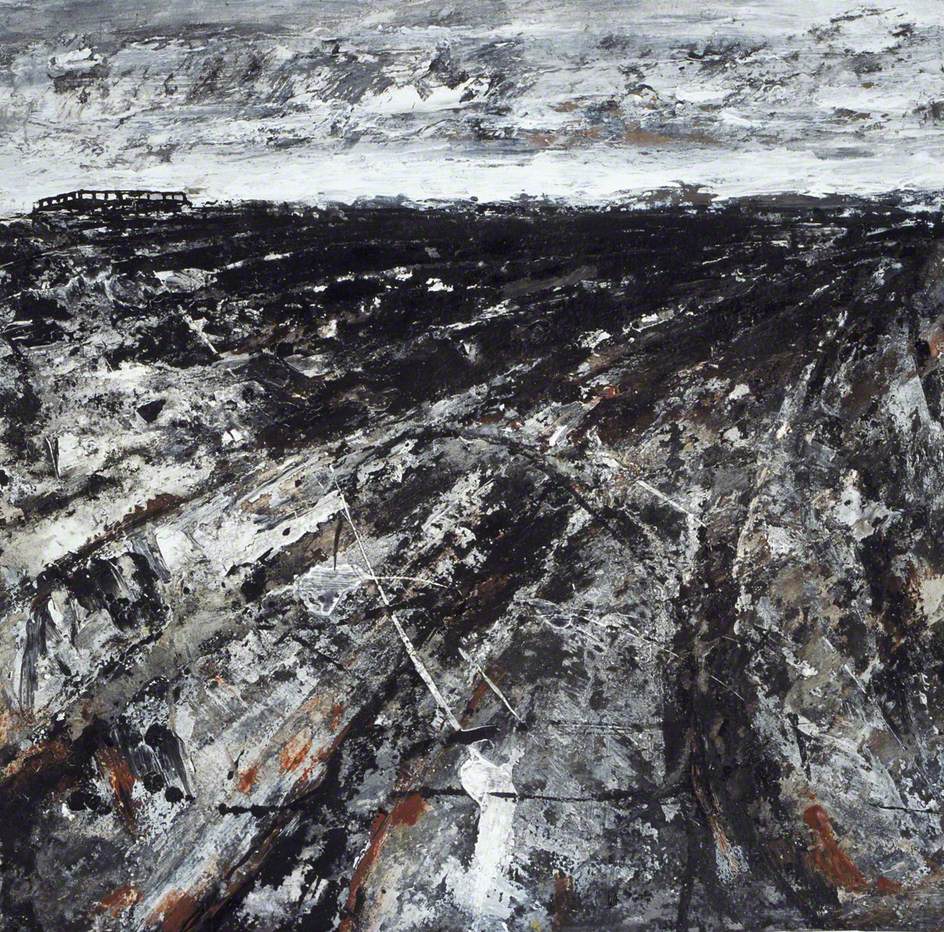 This dramatic and striking painting was part of Phil Whiting’s series of paintings, which was entitled ‘Places of Mourning in the Western World’. The artist’s style is influenced both by the American Abstract Expressionism of Bomberg and Auerbach, and also influenced by German Neo-Expressionist Anselm Kiefer’s unflinching confrontation of the Holocaust. While visiting places such as Flanders, Oradour, Auschwitz-Birkenau and Ground Zero, Whiting was also invited to accompany an N.G.O.’s campaign ‘The Fund for Refugees in Slovenia’. This trip took him to Srebrenica in Bosnia in 2005, where he was able to record in painting the aftermath of genocide. His work from ‘Srebrenica’ was transferred from the EU Parliament to the Royal Cornwall Museum in 2007, and was exhibited in Truro Cathedral in 2012, as well as at other institutions such as Oxford University.

Born in Hull, Whiting studied Art at Newcastle, Portsmouth and Falmouth College of Art. After travelling across Europe and America and enlisting in a variety of jobs, Whiting moved to Cornwall in 1989 and was critically praised for his artistic evocations of the Cornish post-industrial hinterland and mining landscape. He was elected to the Newlyn Society of Artists in 1996, and subsequently became chairman.

Whiting uses mixed media, and often employs acrylic paint in thick, impasto flecks, with smudged charcoal and ink, all applied with brush or palette knife in a succession of thin layers to create evocative and energetic landscape paintings. The level of abstraction which arises from the artist’s liberally smeared spatters, streaks, dripped paint and sweeping striated lines delineate an atmosphere of mystery, and depths of unknown and profound intensity.

Whiting stated ‘Painting the land is the best way I know of evoking half-forgotten memories or truths. In a sense I am a history painter.’ Whiting is attracted to places of trauma, and often paints haunted, psychologically charged landscapes which in the present day continue to bear the scars of past human conflict and atrocities of the 20th and 21st centuries. His interest lies in human rights, landscape and memory, and the aftermath of war and genocide.

Bosnia, of course, featured heavily at the outbreak of the First World War, as the Balkan Crisis in the early 20th century is credited as one of the causes of the escalation of events. The assassination in Sarajevo, a large city in former Bosnia-Herzegovina, of Archduke Franz Ferdinand and his wife Sophie was carried out by a young Bosnian student, Gavrilo Princip of the Serbian group The Black Hand in an act of nationalist protest against Austro-Hungarian rule of the Slavic states. However, Whiting was particularly drawn to Srebrenica as a ‘Place of Mourning’, as it was the site of a devastating Serb-perpetrated genocide of 8000 young male Bosnian Muslims, or Bozniaks as they were known, and the process of ethnic cleansing which saw the expulsion of 20,000 more civilians in July 1995 during the Bosnian conflict. This violent episode of mass executions was described by the UN Secretary General at the time, Kofi Annan, to be the worst committed on European soil since the Holocaust. The subject-matter of history’s cyclical repetition and the continual conflicts between states in certain geographical areas such as the Balkans, whether it is during the First World War, or in the present-day, compels Whiting to paint and to evoke landscapes that are imbued with the memory of human loss, trauma and atrocity.