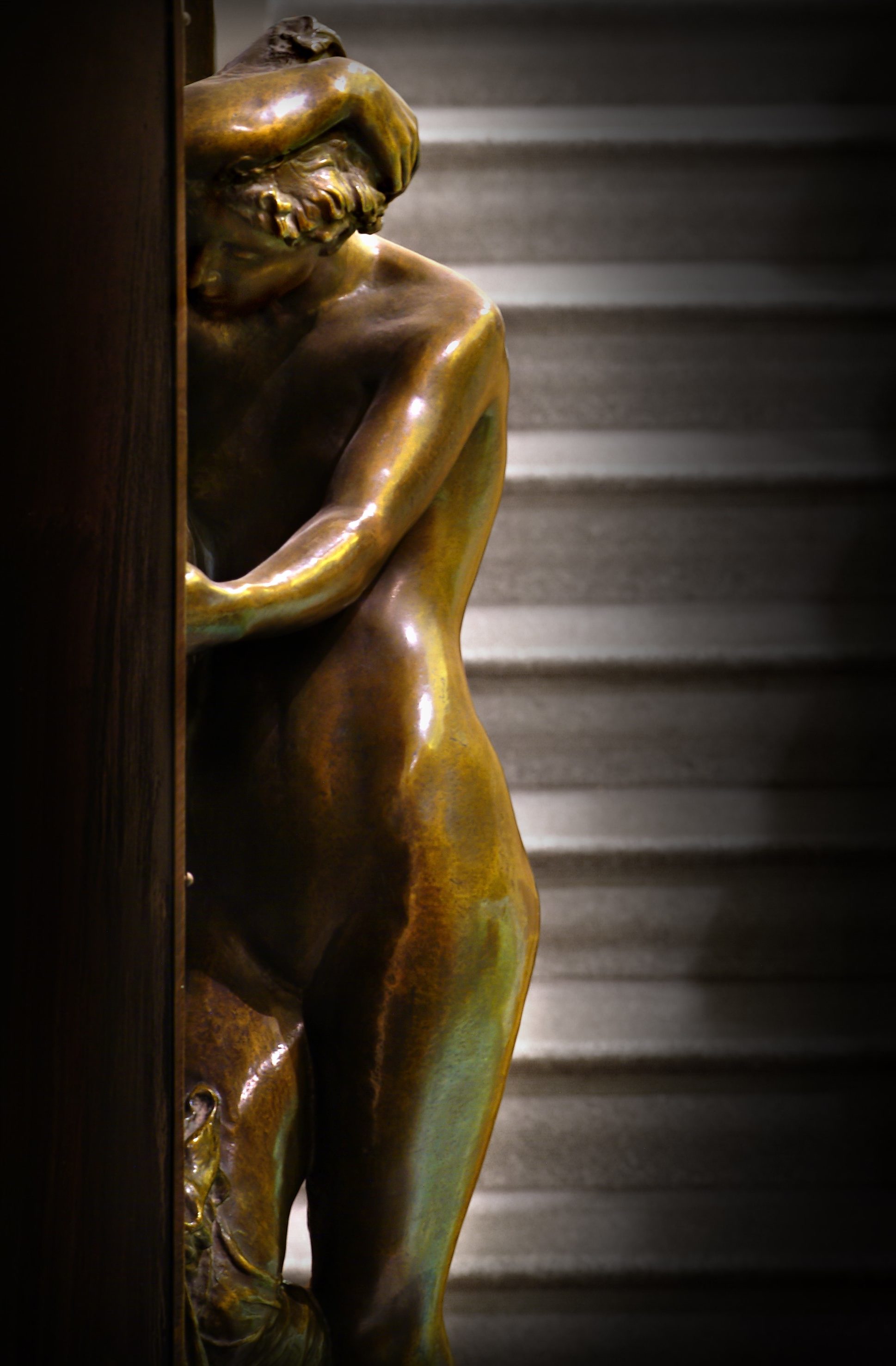 At the Gates of the Past by Esther M. Moore – currently on display at the Royal Cornwall Museum.

Our first blog post for the #5WomenArtists campaign, which was devised by the National Museum of Women in the Arts to promote gender equality during Women’s History Month. You can read more about the project here.

Esther Mary Moore was born on 6th November 1857 and christened on 5th February 1858 at Habergham Eaves in the North West of England. Her parents were Mary Margerison and Henry Moore (born 1822), a wealthy cotton mill owner who was also from the Burnley area of Lancashire.

Moore appears to have worked as a colliery agent for many years before retiring to become a sculptor in 1891. Indeed, her occupation in the 1901 Census Returns for England and Wales is “Artist (Sculptor) working on own account at home”.

Such records reveal that Moore was part of a particularly artistic family. Her sisters included Florence, a painter and draughtswoman, and Charlotte, a woodcarver (born in Burnley in c.1854 and c.1863 respectively).

Moore began exhibiting at the Royal Academy in 1890 and thereafter showed widely until about 1920. Her works include The Charmed Circle of Life, a sculpture presented at the New Gallery in 1904, and Electric Lamp, a bronze lamp bracket displayed with the Arts and Crafts Exhibition Society (of which she was a member) in 1910. She appears in many historic exhibition catalogues, including those of the Walker Gallery in Liverpool and the Royal Scottish Academy in Edinburgh.

In 1908, Moore was judged one of the female artists that the Royal Society of British Sculptors felt might be included in the Franco-British Exhibition. This was a large public fair that was held near Shepherd’s Bush in London. The White City district acquired its name through the exhibition buildings, which were all painted white.

In the collections of the Royal Institution of Cornwall, Moore is represented through her bronze sculpture At the Gates of the Past, which was exhibited at the Royal Academy and the Paris Salon in 1901.

It is an example of the Art Nouveau style, which was popular throughout Europe at the end of the 19th century. The curved, organic lines are typical of that fashion.

At the Gates of the Past is also an example of Symbolist art, which was closely linked to the Art Nouveau movement. Symbolism concerned itself with the relationship between the spiritual and physical world, using images to symbolise ideas.

The figure in the sculpture seems consumed by thought, perhaps with memories of the past, while at her feet lie poppies, the source of opium and symbolic of sleep.