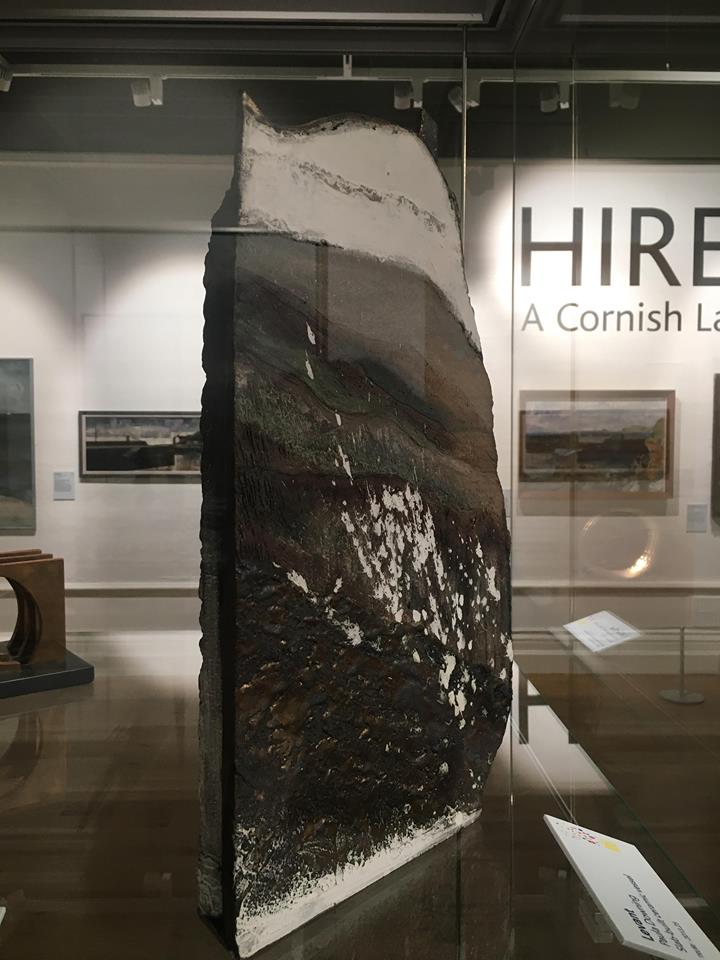 Levant by Paula Downing. Part of the Hireth – A Cornish Landscape exhibition.

Our second blog post for the #5WomenArtists campaign, which was devised by the National Museum of Women in the Arts to promote gender equality during Women’s History Month. You can read more about the project here.

The Philbrick Gallery at the Royal Cornwall Museum is currently occupied by an exhibition entitled Hireth – A Cornish Landscape. Hireth is a Cornish word for which there is no direct translation. It describes an intangible feeling, a longing for the familiarity and comfort of a place. Thus, the overarching aim of the exhibition is to present the visitor with images of Cornwall that will hopefully evoke an emotional response to their sense of place – whether they be a holidaymaker or a local, visiting Cornwall for their first time or their thirty-first.

One of the artists featured in the exhibition is Paula Downing. After a career teaching Fine Art and Ceramics in London, across the South East and overseas, Downing moved to Cornwall several years ago to pursue a life-long ambition to produce her own work. She is now based at a studio in Perranarworthal, a few miles from Falmouth, where she creates sculptural ceramics that reflect the rugged landscape of the county.

Downing’s choice of material is motivated by her fascination with the formation of clay – or the erosion and decomposition of rocks. She starts by walking the land, making fairly realistic observational drawings. The artwork itself, however, evolves entirely from memory. Downing never makes drawings of what she is about to construct.

Neither does she use a potter’s wheel, moulds or formers. She prefers to build entirely by hand or with very few tools, employing the ancient methods of slab, coil and pinch. The clay bodies she uses are various, selected for their fired colour and texture. Downing rarely uses glaze, but her use of clay is supplemented with a variety if minerals, which add depth. For example, the surfaces are created by layering slips and oxides, which bring colour to the pieces.

The designs are influenced by the Modernist artists of St Ives in the mid-twentieth century, but Downing’s inspiration also comes from the natural features, ancient monuments and industrial mine workings that can be seen across the Cornish landscape. In this vein, her ceramic pieces are an effort to reflect the rich history and natural beauty of the county. She tends to produce work in a series with common inspiration, but each piece is individual and unique.

The sculpture on display in Hireth is part of the Levant series. It is a slab-built ceramic vessel inspired by the exposed geology of the cliff and the sea crashing spray against it. Levant is a mine and 1840s beam engine, high-up on the exposed cliffs of the ‘Tin Coast’ and part of the Cornwall and West Devon Mining Landscape World Heritage Site. Copper and tin was mined there for generations, and the mine workings extend over a mile out under the sea bed.

Eleven and a Half