Making her mark in a man’s world – botanist Elizabeth Warren 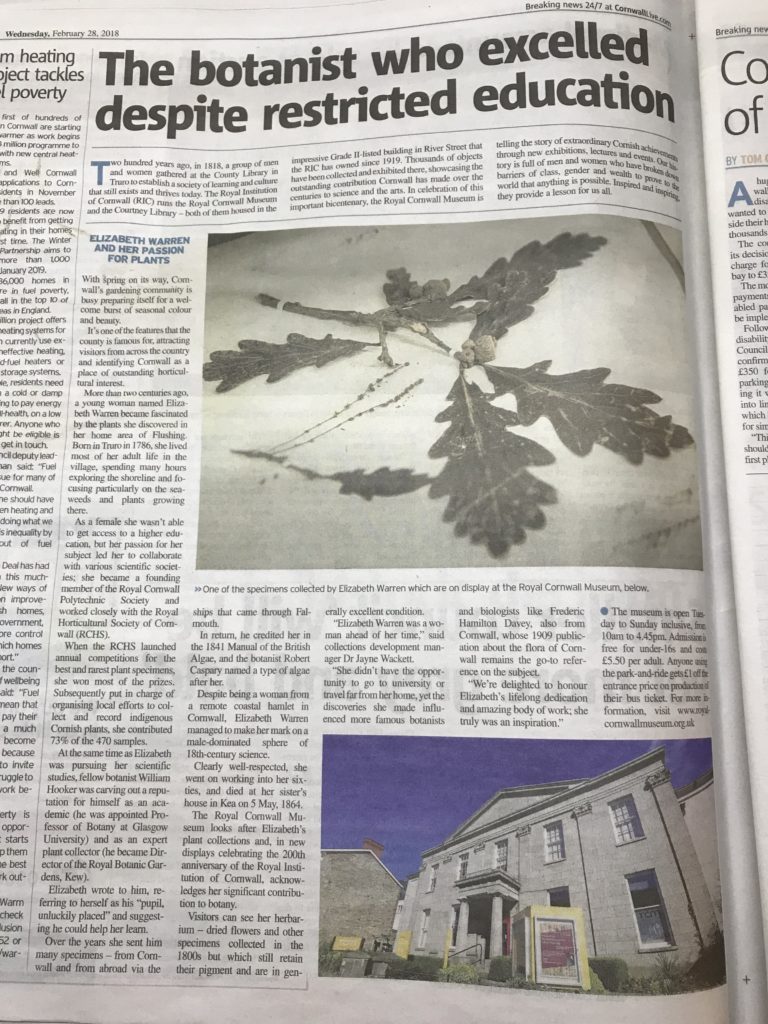 Two hundred years ago in 1818, a group of men and women gathered at the County Library in Truro to establish a society of learning and culture that still exists and thrives today.

The Royal Institution of Cornwall (RIC) runs the Royal Cornwall Museum and the Courtney Library – both of them housed in the impressive Grade II listed building in River Street that the RIC has owned since 1919. Thousands of objects have been collected and exhibited there – showcasing the outstanding contribution Cornwall has made over the centuries to science and the arts.

In celebration of this important bi-centenary, the Royal Cornwall Museum is telling the story of extraordinary Cornish achievement through new exhibitions, lectures and events. Our history is full of men and women who have broken down barriers of class, gender and wealth to prove to the world that anything is possible. Inspired and inspiring, they provide a lesson for us all.

Making her mark in a man’s world – botanist Elizabeth Warren

With spring on its way, Cornwall’s gardening community is busy preparing itself for a welcome burst of seasonal colour and beauty. It’s one of the features that the county is famous for, attracting visitors from across the country and identifying Cornwall as a place of outstanding horticultural interest.

More than two centuries ago, a young woman named Elizabeth Warren became fascinated by the plants she discovered in her home area of Flushing. Born in Truro in 1786, she lived most of her adult life in the village, spending many hours exploring the shoreline and focusing particularly on the seaweeds and plants growing there.

As a female, she wasn’t able to access higher education but her passion for her subject led to her collaborating with various scientific societies – becoming a founding member of the Royal Cornwall Polytechnic Society and working closely with the Royal Horticultural Society of Cornwall (RCHS). When the latter launched annual competitions for best and rarest plant specimens, she won most of the prizes. Subsequently put in charge of organising local efforts to collect and record indigenous Cornish plants, she contributed 73% of the 470 samples.

At the same time as Elizabeth – or ‘Miss Warren’ – was pursuing her scientific studies, fellow botanist William Hooker was carving a reputation for himself as an academic (he was appointed Professor of Botany at Glasgow University) and as an expert plant collector (he became Director of the Royal Botanic Gardens, Kew). Elizabeth wrote to him, referring to herself as his ‘pupil, unluckily placed’ and suggesting he could help her learn. Over the years she sent him many specimens – from Cornwall and from abroad via the ships that came through Falmouth. In return, he credited her in the 1841 Manual of the British Algae and botanist Robert Caspary named a type of algae after her.

Despite being a woman from a remote coastal hamlet in Cornwall, Elizabeth Warren managed to make her mark on a male-dominated sphere of eighteenth century interest. Clearly well-respected, she went on working into her sixties and died at her sister’s house in Kea on 5 May 1864.

The Royal Cornwall Museum looks after Elizabeth’s plant collections and in new displays celebrating the 200th anniversary of the Royal Institution of Cornwall, acknowledges her significant contribution to botany. Visitors can see her herbarium – dried flowers and other specimens collected in the 1800s that still retain their pigment and are in generally excellent condition.

“Elizabeth Warren was a woman ahead of her time,” said Collections Development Manager Dr Jayne Wackett. “She didn’t have the opportunity to go to university or travel far from her home yet the discoveries she made influenced more famous botanists and biologists like Frederic Hamilton Davey, also from Cornwall, whose 1909 publication about the flora of Cornwall remains the go-to reference on the subject.

“We’re delighted to honour Elizabeth’s lifelong dedication and amazing body of work – she truly was an inspiration.”