The Royal Cornwall Infirmary during the First World War 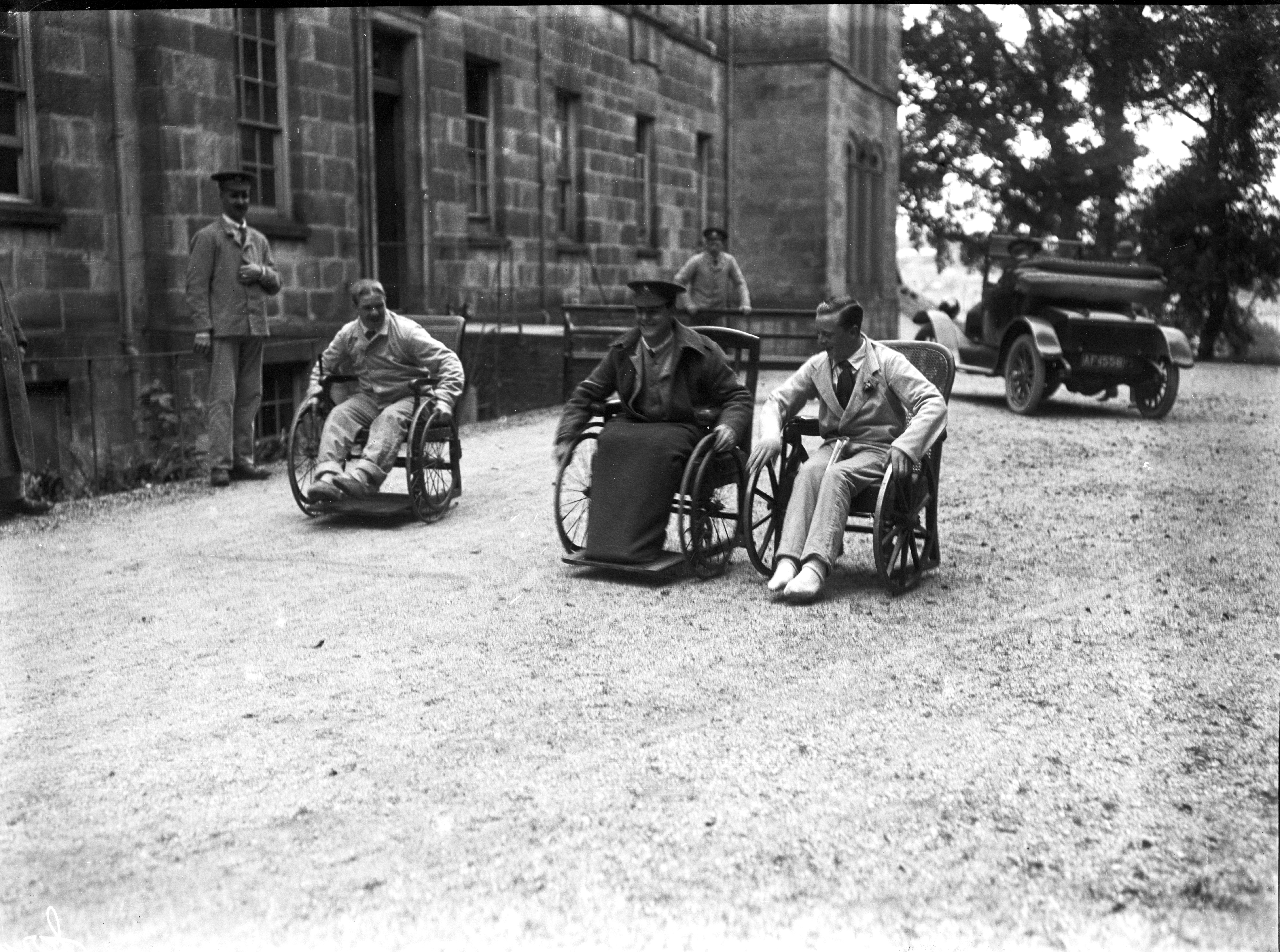 This series of photographs by local photographer A W Jordan documents the presence of nurses and wounded soldiers at the Royal Cornwall Infirmary in Truro during the First World War. More recently known as Truro City Hospital, the Infirmary has now been converted into homes. However, the history of the building goes back much further. The construction was completed in May 1799 by William Wood, who was also the architect and overseer of the nearby Lemon Street development. The matron, porter and other members of staff were “elected” in the June of that year, with the first patients being received on the 12th of August. This means that the Royal Cornwall Infirmary was the first hospital in Cornwall, followed by the East Cornwall Hospital at Bodmin in the 1850s, the Miner’s Hospital at Redruth in 1871 and the West Cornwall Hospital at Penzance in 1874. 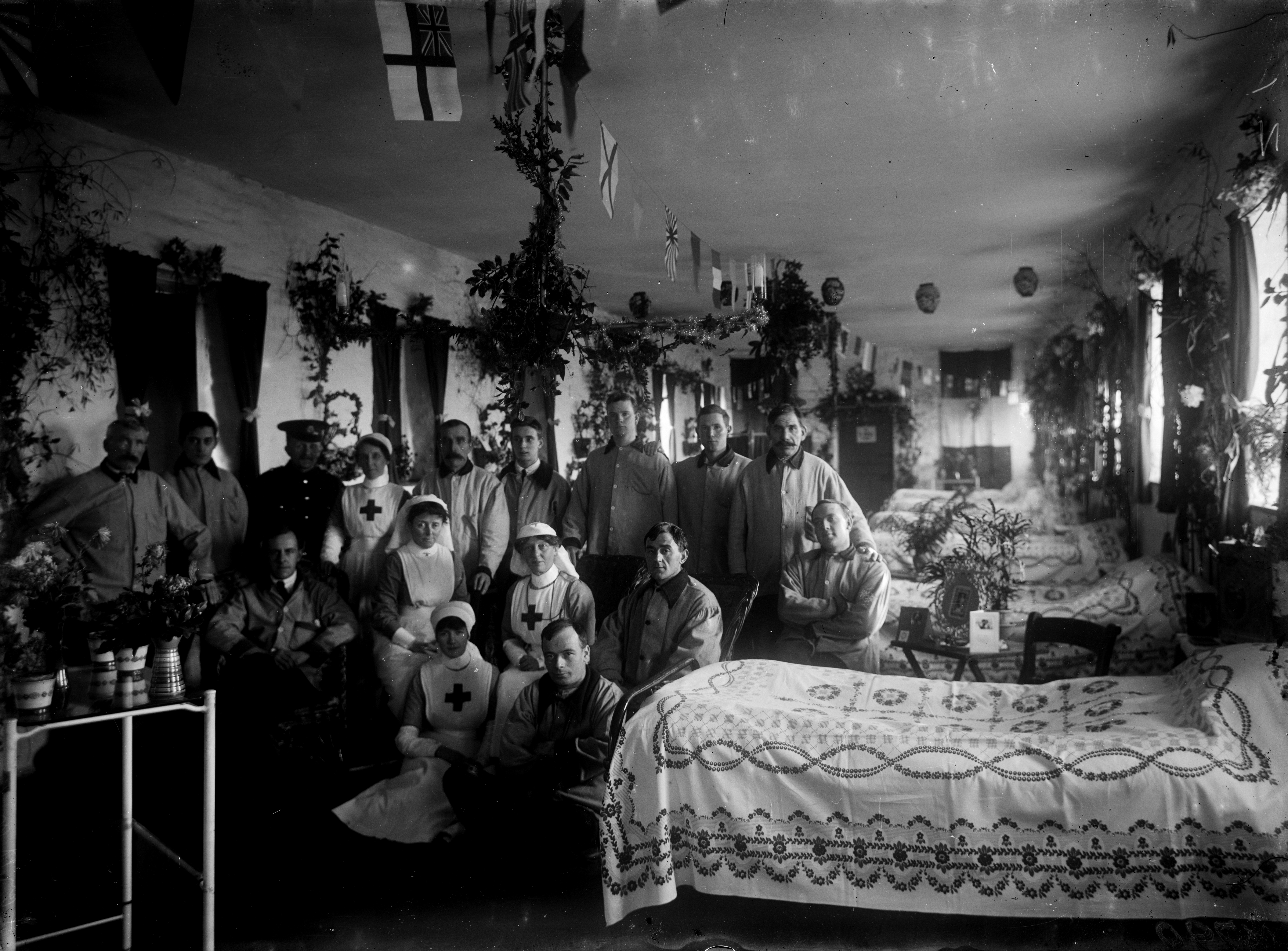 The building began life as a single rectangular structure with an extension to the back, initially allowing for 20 beds – 10 for men and 10 for women, on separate floors. In the Infirmary’s first year, a total of 47 patients were admitted. Generous public donations meant that proposals for a new extension were carried out by 1869 for a price of £123 18s 0d. When the Royal Cornwall Gazette visited in the July of that year, they described the accident ward as “being illuminated by gas brackets” and the “walls enlivened by paintings”. This was the first of many extensions and alterations that were carried out during the 19th and 20th Centuries. The surgical side of things was also improved throughout this time. The number of operations performed and casualties dealt with were increased by four and six times respectively, thanks to improved surgical techniques. At the beginning of the 1900s there was a rise in specialisations: the operating theatre was modernised and the field of abdominal surgery was opened up by the use of anaesthesia. In 1889 the Infirmary concentrated on opthamology, in 1894 a dental surgeon was appointed and in 1912 the eye department acquired its own operating theatre. Mr G Petherick of St Austell had presented the Infirmary with a new X-Ray plant in 1907. However, there was no electricity to run it, and so he had that installed too.

During the First World War, the Infirmary provided accommodation for a large number of wounded soldiers. In 1914 they offered 50 beds to the War Office for serious surgical cases from the Duke of Cornwall’s Light Infantry war casualties. The Duke of Cornwall’s Light Infantry was established during the 1881 Army reforms by merging the 32nd (Cornwall Light Infantry) Regiment of Foot with the 46th (South Devonshire) Regiment of Foot. The new regiment was named after Queen Victoria’s eldest son: the future King Edward VII. On the outbreak of the First World War, the 1st Battalion was deployed straight from Britain to the Western Front in August 1914. They spent all but six months of the conflict there, with the interval in Italy from November 1917. The 2nd Battalion arrived on the Western Front in December 1914, staying there for 11 months before shifting to Macedonia.

The first contingent of wounded arrived in Truro in June 1915. They were carried from the railway station in conveys of ambulances. One of A W Jordan’s photographs shows the first batch of patients on June 16th, displaying wounded soldiers in an open car outside of the station. Other photographs from this time exhibit nurses rolling bandages and operations in progress. Some of the most interesting images show nurses and patients, a few of them in military uniform, posing outside of the Infirmary. Other pictures display a lighter side of the convalescence process, with wheelchair races, games of croquet, and nurses and patients playing cards on the ward at Christmas. 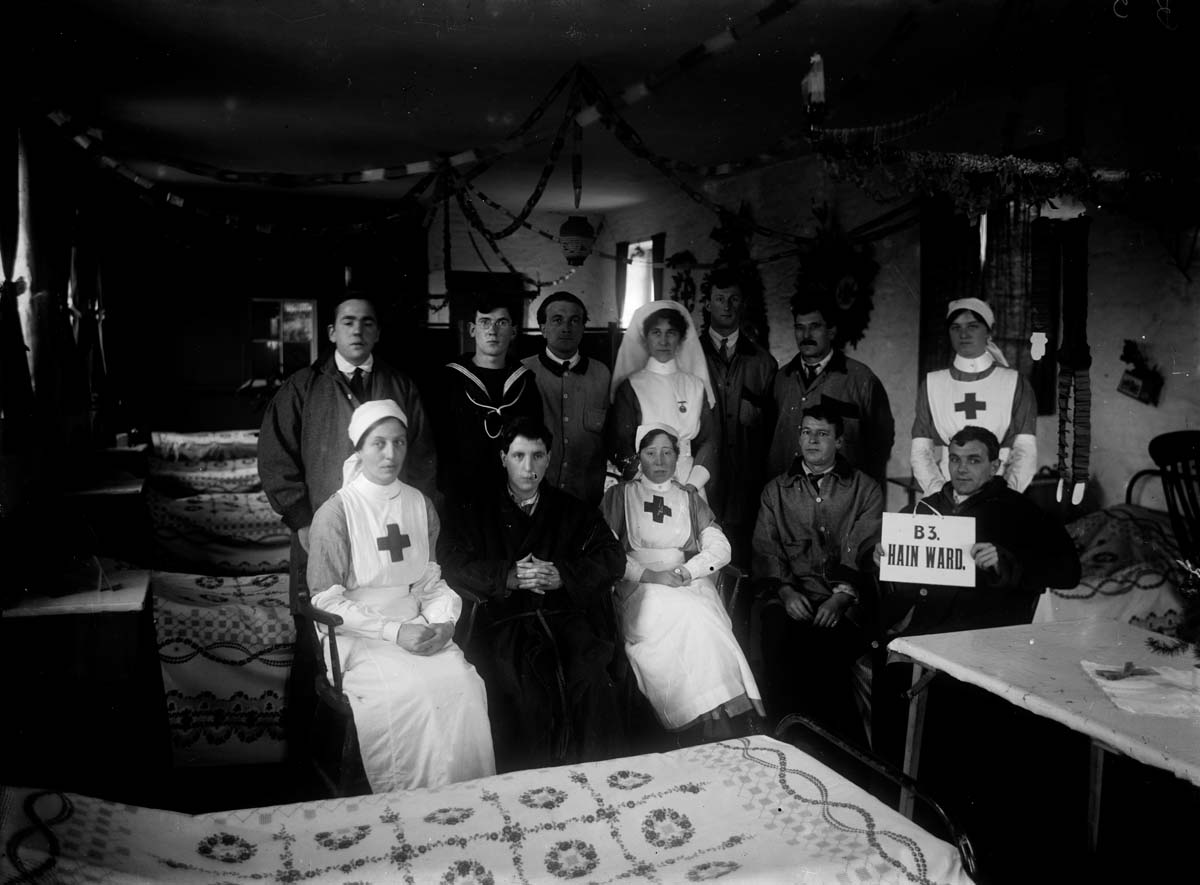 The end of the First World War was not the end of the Royal Cornwall Infirmary’s association with conflict. When the Second World War broke out, the protection of the hospital was one of the first issues acted upon. “Ramparts” made out of 25,000 sandbags, which were filled with earth excavated during recent extensions to the building, were constructed and “sitting-up patients” were sent home. However, on the 6th of August 1942, two enemy fighter bombers each dropped a 500 kg bomb on Truro. One exploded mid-air above Agar Road after having hit the ground north of the Cathedral at the bottom of Campfield Hill. The other fell near the main entrance of the Infirmary, destroying the dispensary, the ends of the medical ward, and the male and female surgical wards – virtually demolishing the south wing of the hospital. Nine to twelve people were killed, including a ward sister, a nurse and three visiting relatives. Despite this disaster, the Infirmary continued on, becoming a part of the National Health Service in 1947 and remaining until the 15th of January 1999. 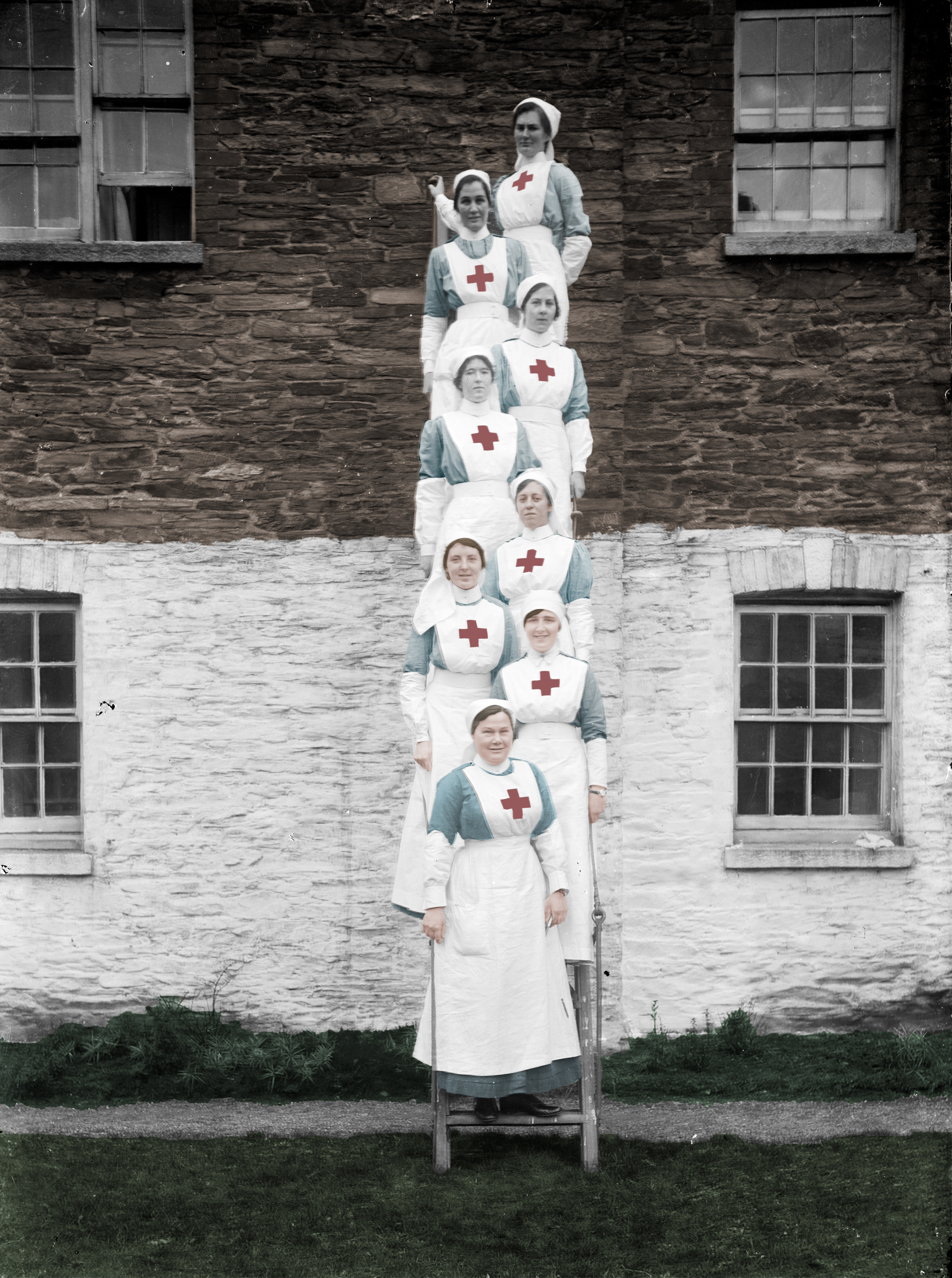