The Use of Bayonets during the First World War 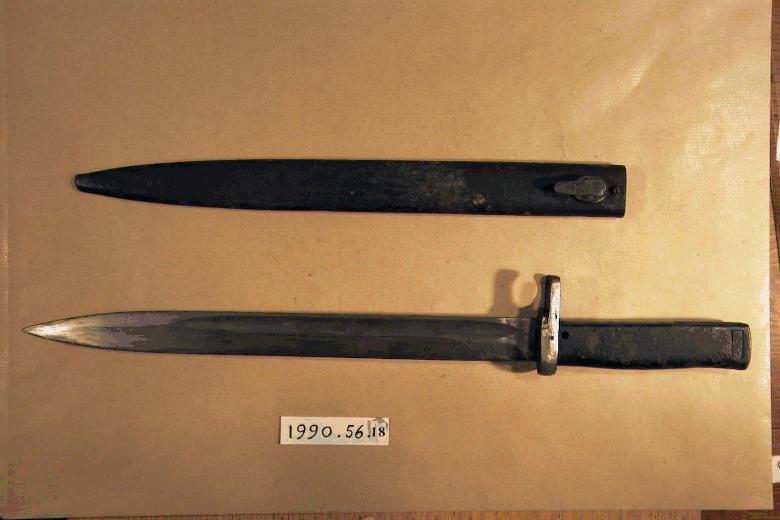 This picture features a bayonet from our archives, along with its scabbard and bracket to attach to its rifle. The soldier in the trenches holding his bayonet rifle is one of the most evocative, lasting images from the First World War.

The earliest mention of the bayonette dates back to the late 16th Century, and may have simply referred to a type of knife. It may have originated as a hunting weapon, allowing the hunter to fend off their prey in the event of a missed shot. The weapon was developed from the pike by the French in the 17th century, whose socket bayonet had a sleeve that fitted around the barrel, and was locked with a stud. This enabled the gun to be fired with the bayonet firmly secured in place, and it was adopted by armies throughout Europe.

The bayonet later developed into a defence weapon for the infantry soldiers. The development of breech-loading rifles in the 19th century provided infantrymen with the firepower capacity to beat off a cavalry charge. It may have seemed a rudimental weapon against the technological progress of shelling, machine guns, and rapid-fire artillery, however, bayonet training remained a major part of frill training, even into the Second World War. It was even employed by the US in training armed forces in Vietnam. Its use was thought by the army generals to be more for psychological benefit than practical.

The First World War manual, Infantry Training read “The rifle and the bayonet are the principal weapons of the individual infantry soldier. The first requirement of the infantry soldier is confidence in these weapons, based on his skill in their use.”

“The bayonet is the weapon for hand-to-hand fighting, and its use, or the threat of it, finally drives the enemy from his position or causes him to surrender.’

The British Army training manual, Bayonet Training (1918) stated that ‘Hand-to-hand fighting with the bayonet is individual […] killing is at close quarters, at a range of 2 feet or less, when troops are struggling corps a corps in trenches or darkness.’

The British soldier had a 17in sword bayonet attached to the Short Magazine Lee-Enfield, whereas the bayonet of the average French infantryman was somewhat different; instead of a sword he had a 52cm rapier-like epee bayonet. The German bayonet was the S98/05 which was attached to the standard Gewehr 98 rifle.

Many veterans have described the mundane activities for which they used their bayonet, such as toasting bread, opening tin cans, scraping mud off uniform and boots, and killing rats. However, the soldiers were less keen on using the bayonets as weapons, such as a British non-combative officer, Frank Raine:

“Well I never used a bayonet. I couldn’t face sticking a bayonet into anybody. I could’ve done it, but I didn’t do it. Safer shooting: I always used to say, if ever it comes to bayonet fighting, I’m having a bullet in the breach. And that’s what happened with me. Instead of going near enough to use your bayonet, you could kill him from two or three yards with a bullet – no personal contact. That appeared obvious.”

Lieutenant Colonel R. B. Campbell was responsible for the BEF’s School of Physical and Bayonet Training, and became infamous for delivering lectures to the troops in order to overcome the natural reluctance to use such a weapon. An army official correspondent Philip Gibbs recalls,

“Colonel Ronald Campbell was a great lecturer on bayonet exercise. He curdled the blood of boys with his eloquence on the method of attack to pierce liver and lights and kidneys out of the enemy. He made their eyes bulge out of their heads, fired them with blood-lust, stoked up hatred of Germans – all in a quiet, earnest and persuasive voice and a sense of latent power and passion in him.”

This supposedly morale-boosting incitement to violence and hatred of the enemy bemused the officer and war poet Siegfried Sassoon, who upon hearing Campbell delivering his lecture, contemplated the ‘homicidal eloquence’ of the speaker as Campbell described the bullet and bayonet as being like brother and sister. Inspired by this perverse and unsettling analogy, Sassoon wrote ‘The Kiss’, which eroticises the action of the bayonet, and casts it as being a sadistic, murderous instrument of war.

TO these I turn, in these I trust-

To his blind power I make appeal,

I guard her beauty clean from rust.

He spins and burns and loves the air,

And splits a skull to win my praise;

But up the nobly marching days

She glitters naked, cold and fair.

Sweet Sister, grant your soldier this:

That in good fury he may feel

His body where he sets his heel

Quail from your downward darting kiss.