As discussed previously not all men went to war. Those who were eligible to go but didn’t generally had failed their medical test and were declared exempted as ‘medically unfit for duty’. Some medically-healthy men however, were purposefully held back in ‘reserved occupations’.

Definition: A reserved occupation, also known as a ‘scheduled occupation’, a ‘starred’, ‘certified’ or ‘badged’ occupation or an ‘essential service’, is an occupation that is considered by the government to be paramount to the running of the country, and a job that could not be performed by another. People employed in such occupations would therefore be exempted from military service, in some circumstances even if they wanted to enlist! What classified as a reserved occupation depends on the needs and circumstances that surround each war.

With the advent of Kitchener’s ‘New Army’, the military expanded at such a rate that it could not be supplied and great a strain was placed on essential industry as men working in industries and occupations supplying the war effort were permitted to volunteer. Historian Juliette Pattinson for instance wrote that:

‘…in just two days in early 1915, 30,000 miners from Rhondda in South Wales enlisted. They had to be recalled from the trenches in late 1915 and brought back to produce coal. Men were also returned from the front to resume roles in other key industries such as agriculture and munitions.’

For the First World War reserved occupations included (but were not limited to), a selection of clergymen, farmers, doctors, teachers, certain classes of industrial worker e.g. coal miners, train drivers and those working in the shipyards, those in the iron and steel industries especially in factories which were producing vital ammunition and equipment for the front lines.

In a context whereby encouragement to enlist was strident those who were exempted from military service were issued with papers and/or a special badge to prove they were undertaking war work on the Homefront. Again, this was important due to the rising societal pressure for men to be seen to be ‘doing their duty’; those remaining at home needed to adequately demonstrate they were working in the national interest and constantly validate the reasons for their being kept back. 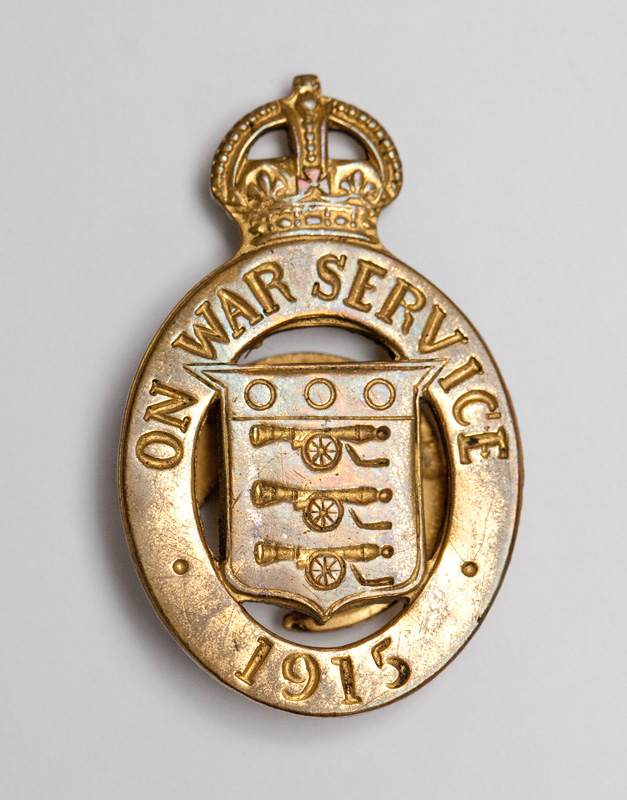 On War Service Badge circa. 1915. Badges like the one above, were awarded to acknowledge the effort being made by those on the Homefront and arguably defended civilian men in reserved occupations against accusations that they were ‘shirking their responsibilities’.

The Haslam Family and Reserved Occupation

Bernie, Elsie’s brother, as far as can be found did not go to war despite being of 34 years of age. Due to the loss of official records over the years there is little written evidence and as a result much is unknown as to why he did not. One initial explanation was Bernie, as a farmer, may have been held back from War to manage the land.

In both the 1901 and 1911 census’ Bernie is listed as working as a poultry farmer in weeks St. Mary, ‘own account’ meaning he worked his own farmland wherein he neither employed or was employed by any other persons. 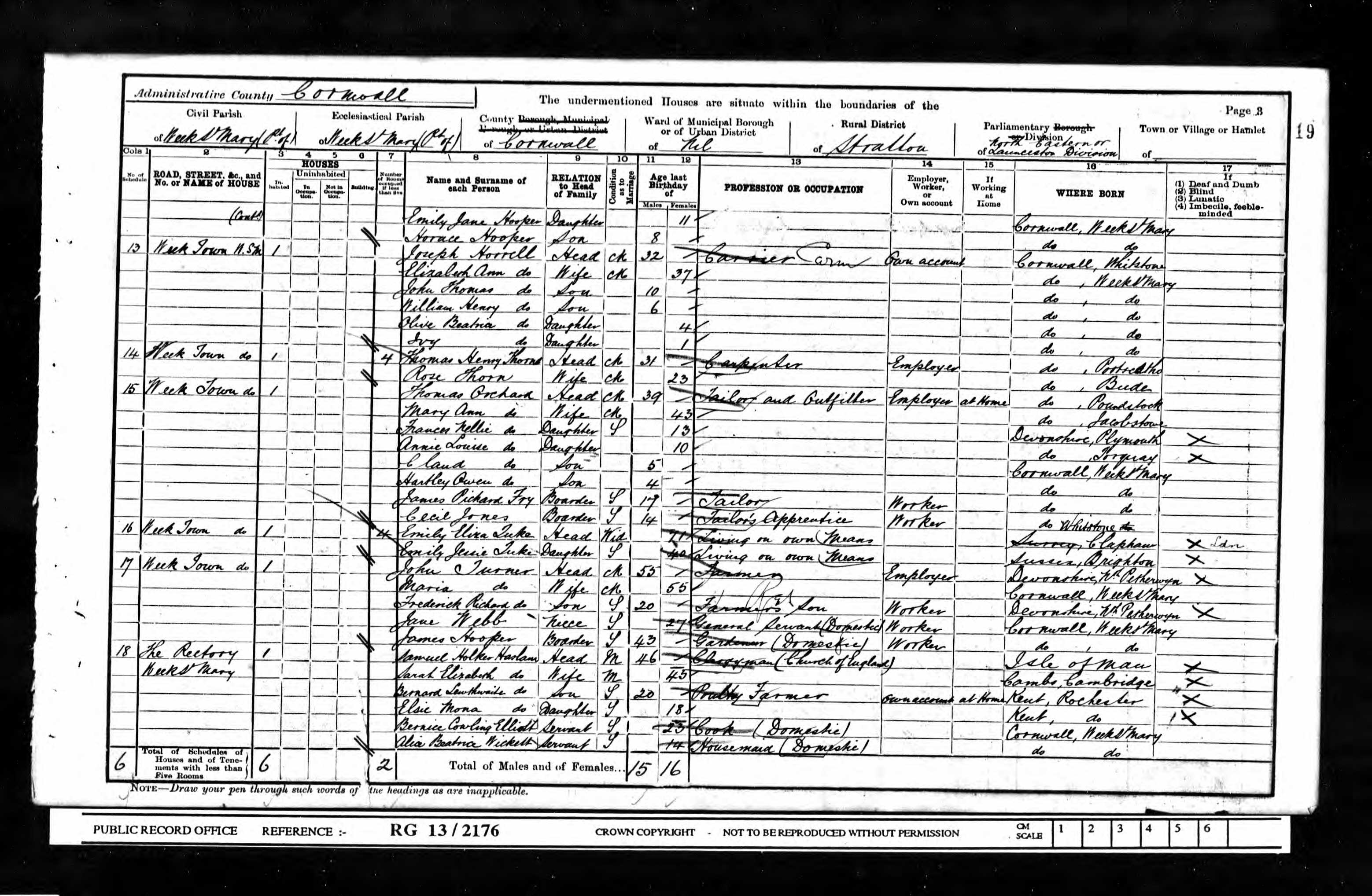 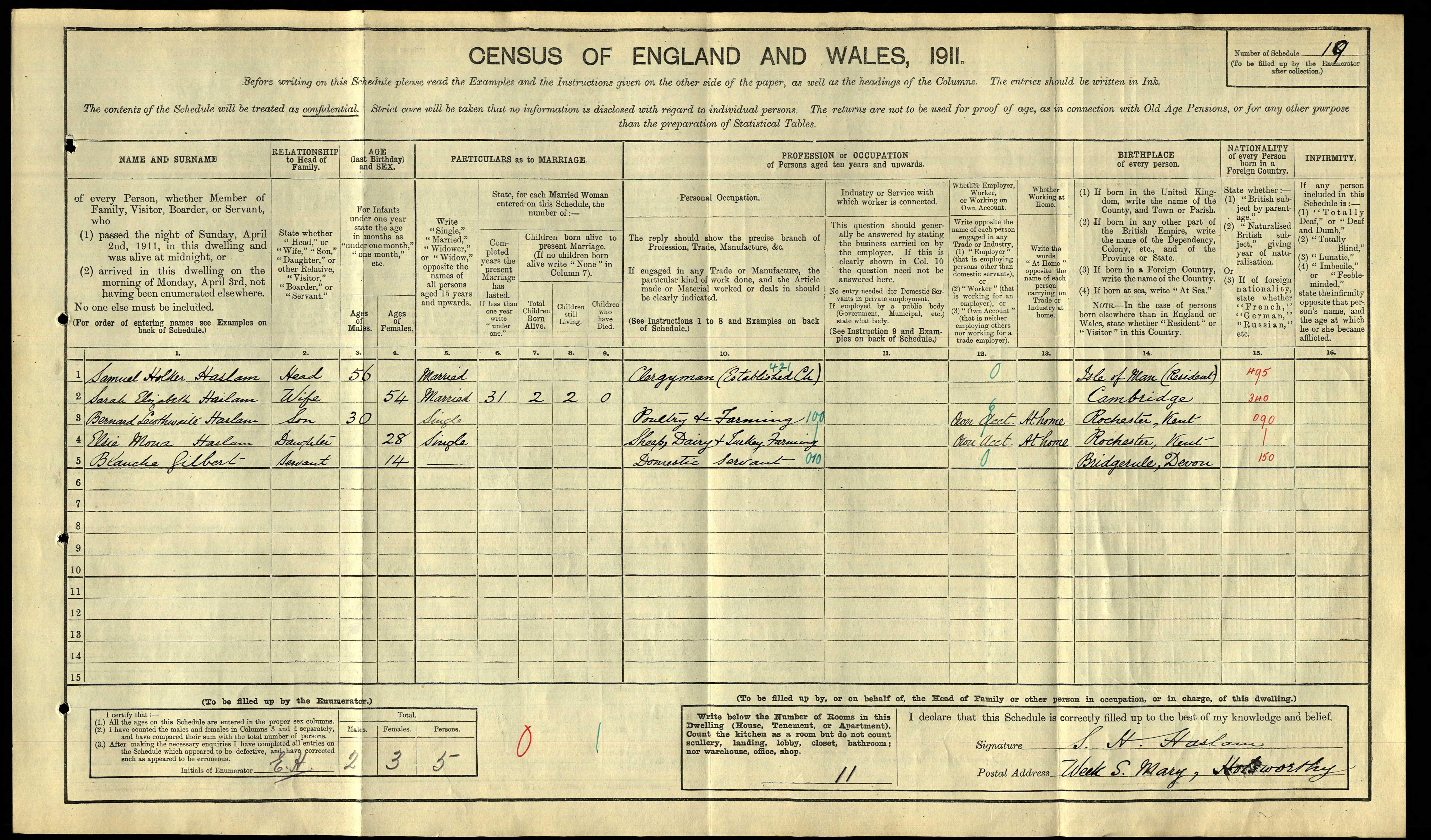 In her diary entries attached below, Elsie writes that Bernie did have to ‘register’ and attend an ‘audit meeting[s] in Stratton’. This continues to happen incrementally over the course of the war. The date that Bernie starts attending the audits aligns with the initial push for recruits began: September 1914.

Transcription: ‘… Father + I took Bernie + Thomas [a local farm hand] to an audit meeting at Stratton called at Stamford Hill to take a Register to old Mrs Kingdom + then home in time for tea’. 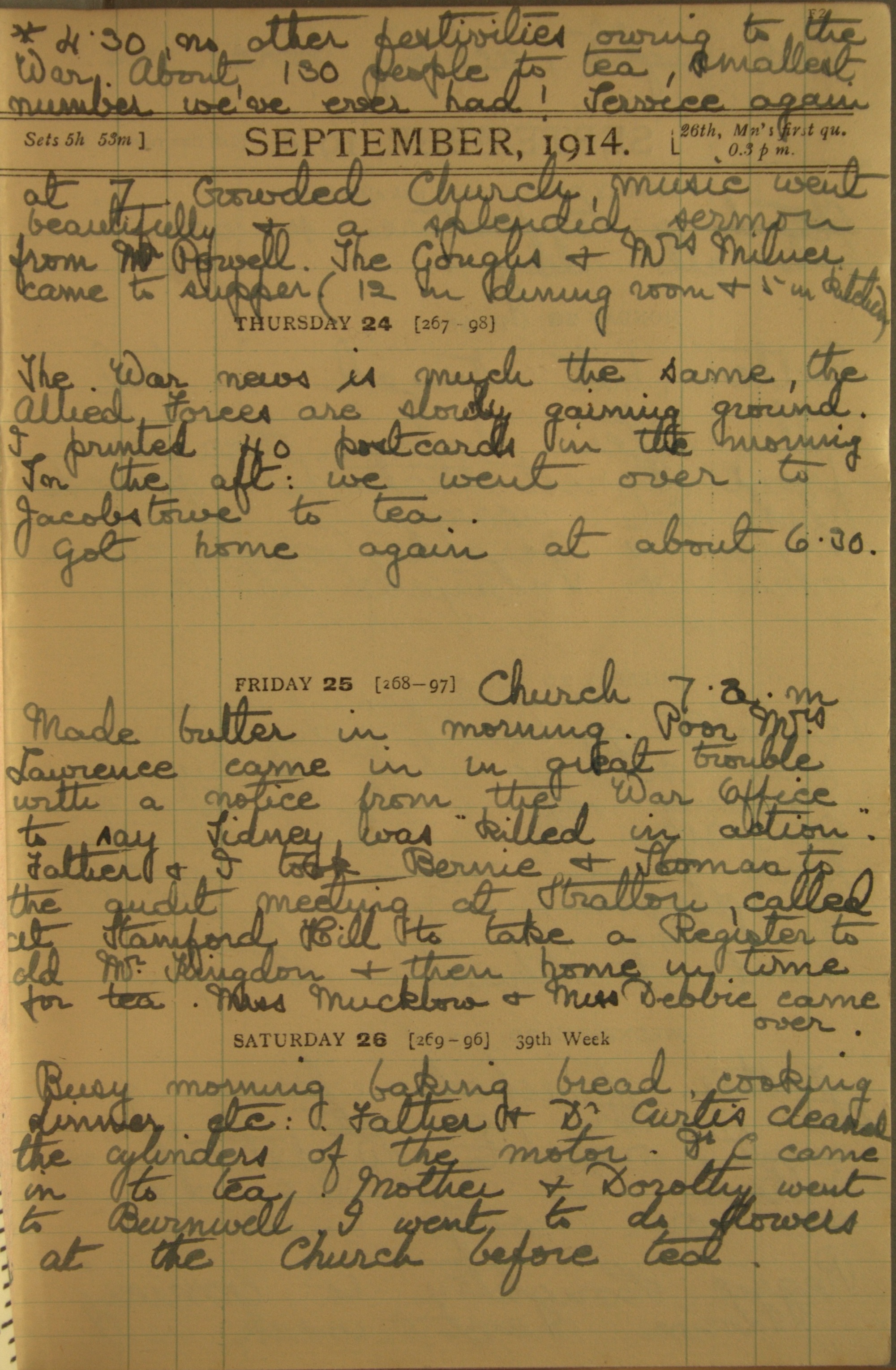 Transcription: ‘Father took Bernie + Horrell to the audit at Stratton in the aft[ernoon]. Charlie went with them + on to Bude to see the recruiting sergeant about enlisting.’ 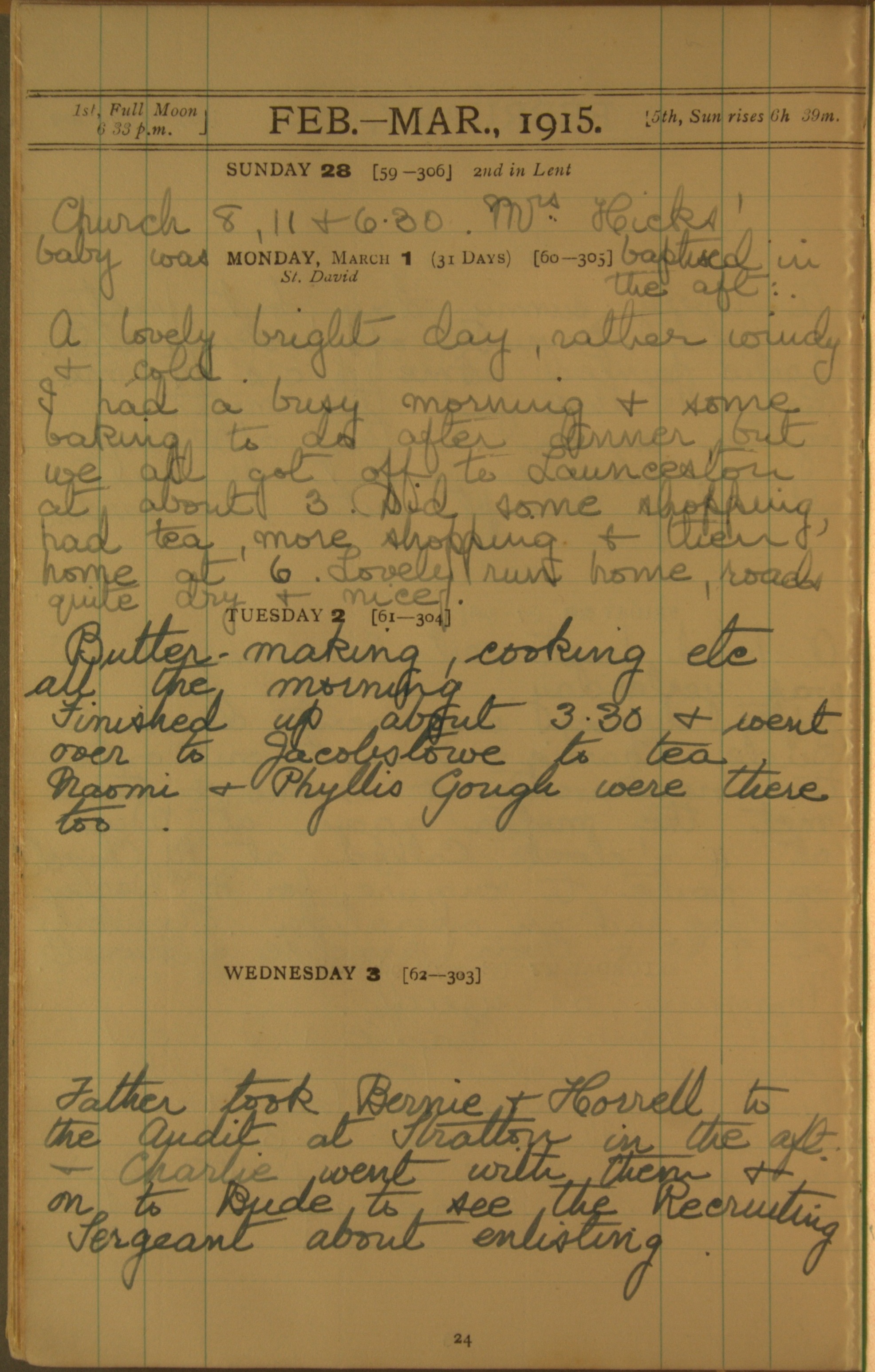 Transcription: ‘Bernie + Father + Knight (from edd Mill) went off to am audit at Stratton at 11:45am + got home at 1.30pm. I had a lot of letters to write in the afternoon. We packed up a parcel for Mrs Gabbins + sent it to a German prisoner [of war] camp, to a Pte [short-hand for the military service rank ‘Private’] in the Middlesex Regt [short-hand for Regiment].’ 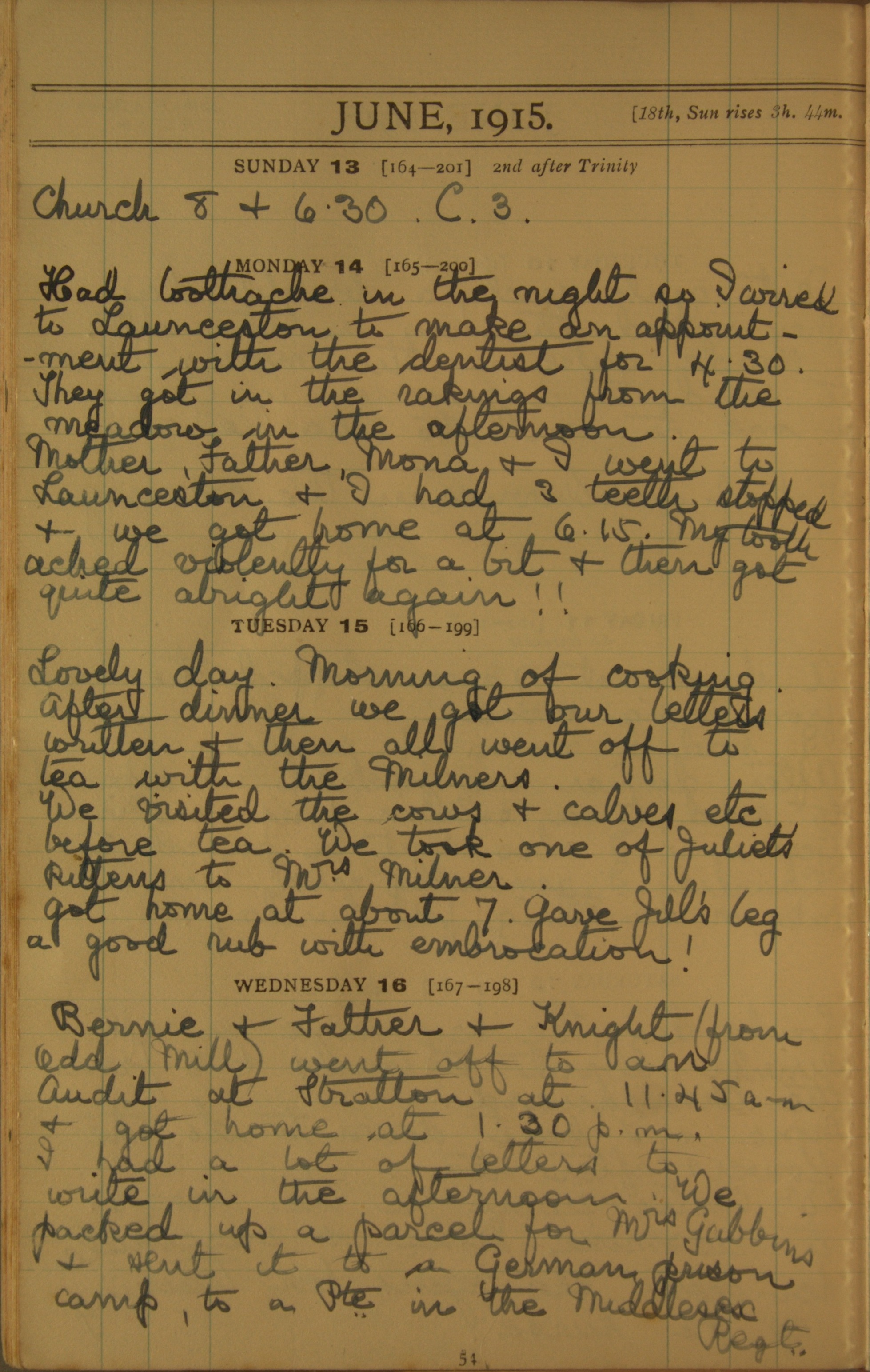 In 1918, however Elsie writes of Bernie that he had a medical ‘re-examination’ and that he has ‘passed G3 again’. Leading us to believe that by at least 1918 Bernie was medically exempt from being conscribed or enlisting for G3 regulations state that those persons: whose limitations resulting from a known medical condition do not pose an unacceptable risk to the health and/or safety of the individual or fellow workers in the operational/work environment;

[or] who may require and take prescription medications, the unexpected discontinuance of which will not create an unacceptable risk to the member’s health and/or safety would be unfit for duty.

‘…Bernie got his “call-up ‘for re-examination’‘. 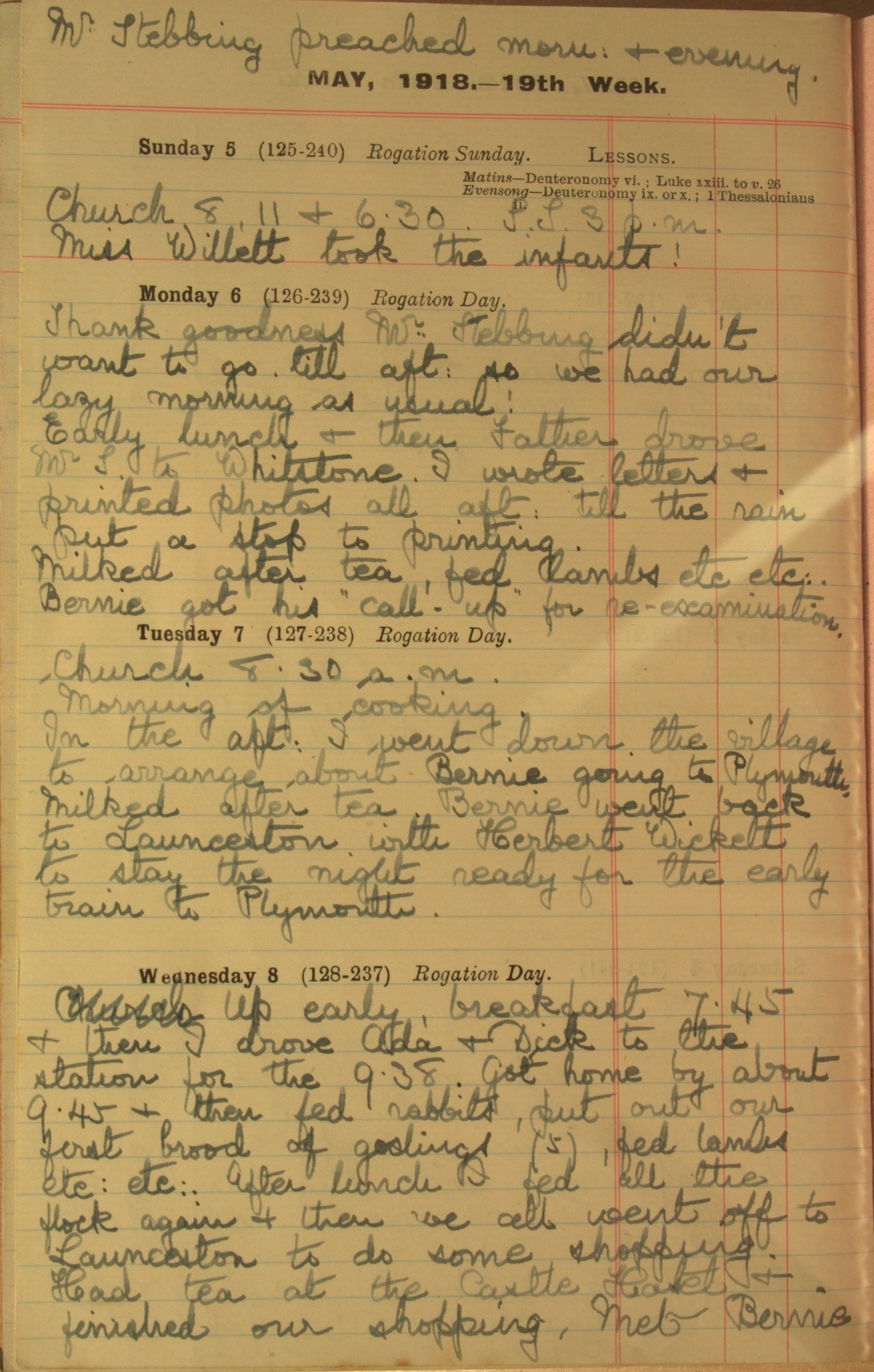 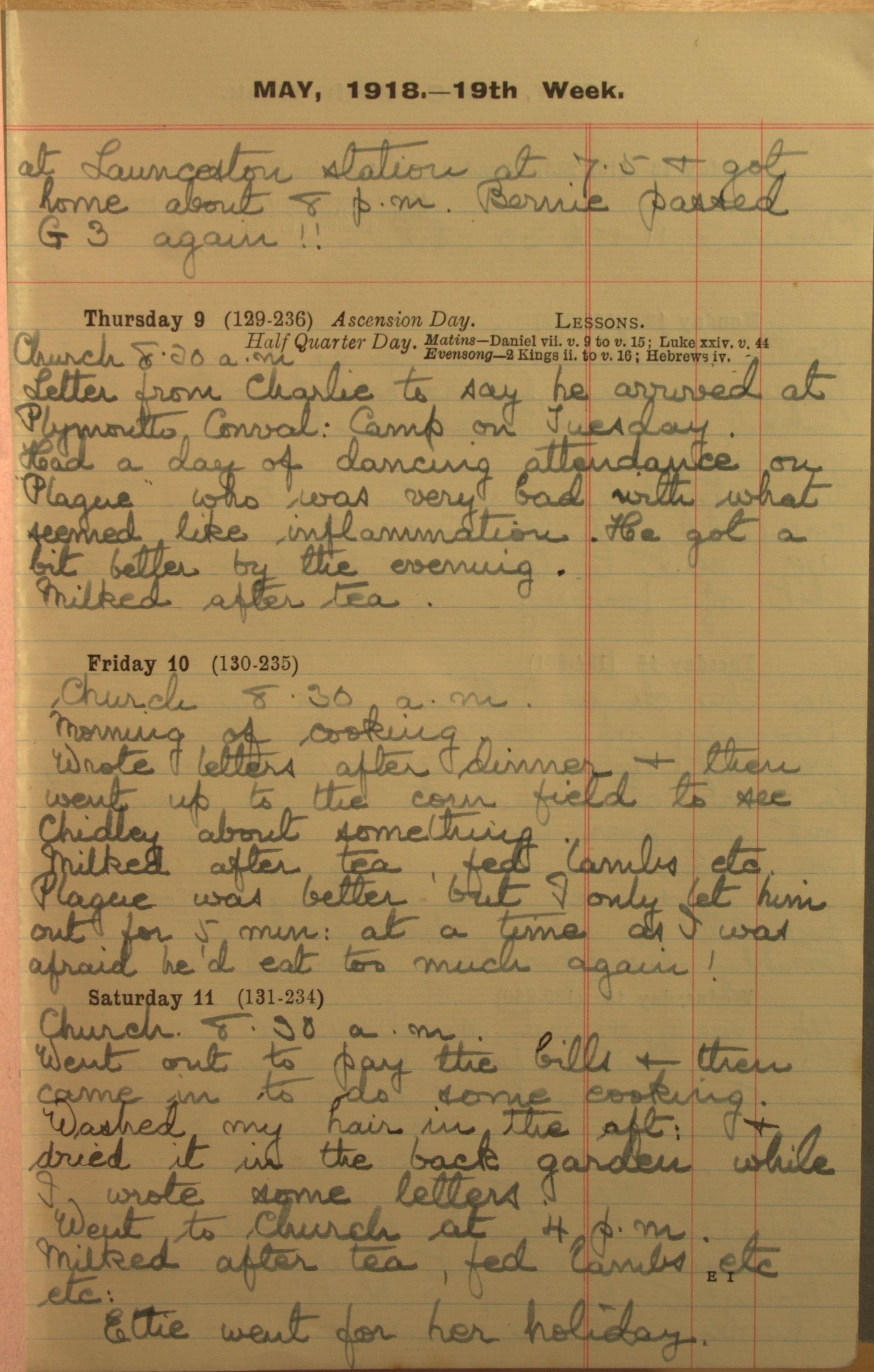