In the summer of 1913, the Council were discussing plans for the construction of the museum buildings on River Street in Truro. The journals include references to features like the central hall and items such as the Trewinnard Coach, all of which would be instantly recognisable to visitors today. 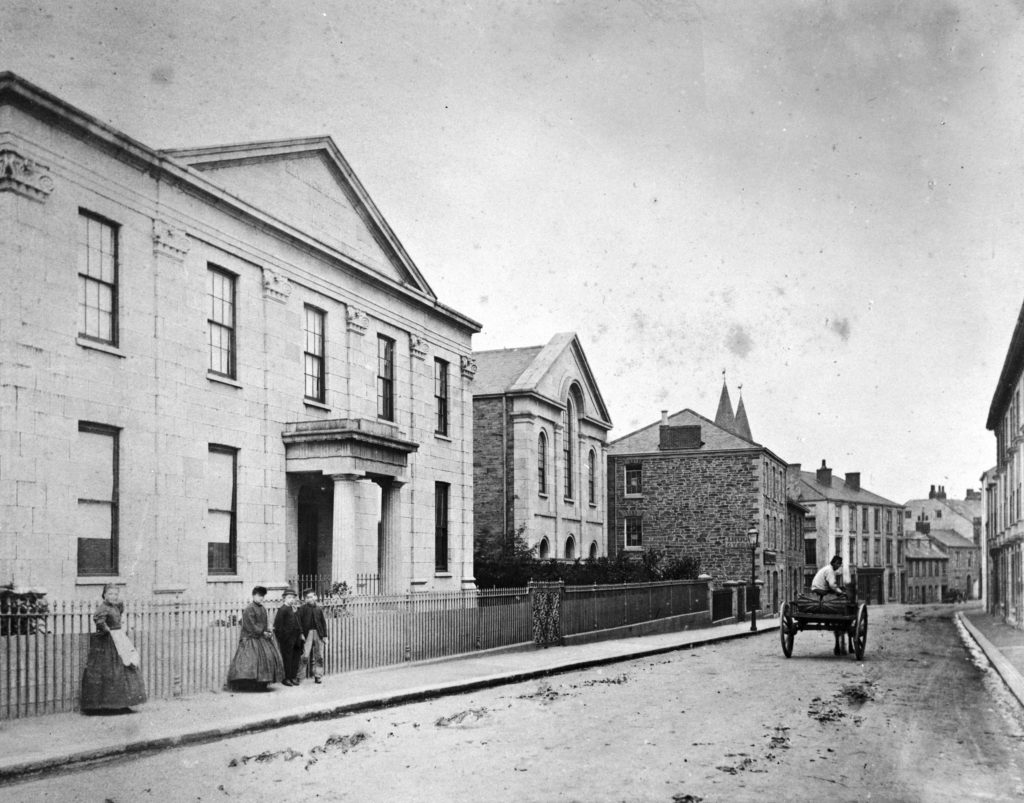 A view of River Street, looking east, showing the Truro Savings Bank and Baptist Chapel in the late 1800s, before conversion into the Royal Cornwall Museum. Photographer: Unknown. © From the collection of the RIC (TRURI-TRUris-4).

Despite the outbreak of war earlier in the year, by the Annual Meeting of December 1914, the first section of the new museum buildings had been completed. As a result, the RIC quickly received an application from the County Director of the British Red Cross for the use of certain rooms. 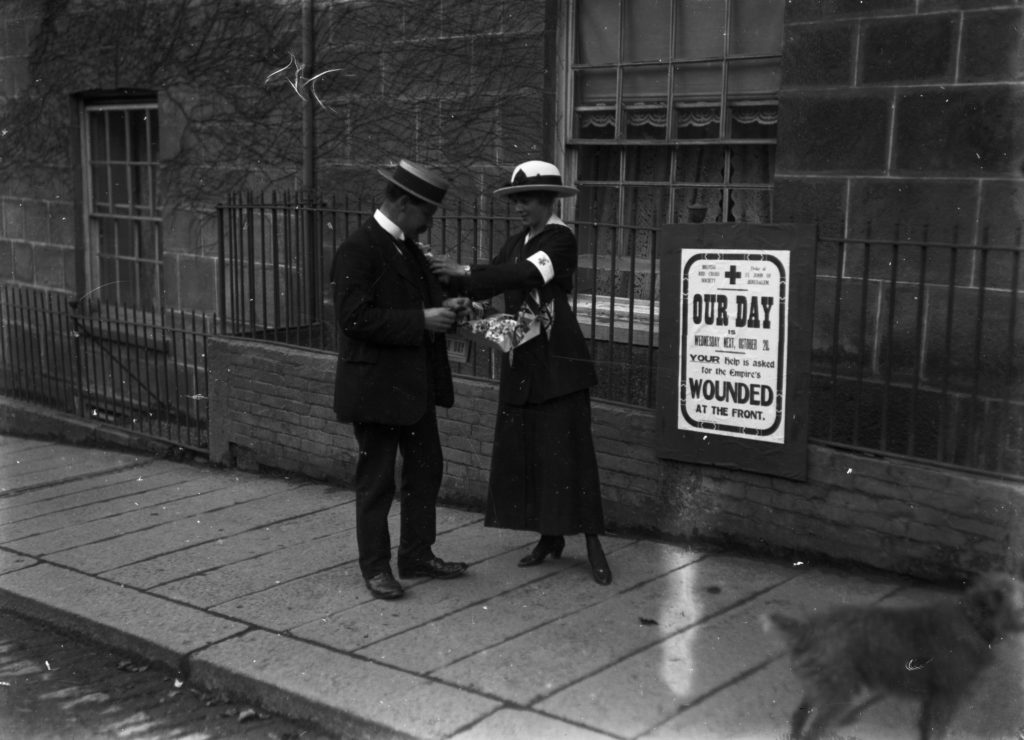 British Red Cross Our Day collection on Lemon Street, Truro. Fundraising was of vital importance throughout the First World War. By the end of the war, £21,885,035 had been raised and £20,058,355 spent on hospitals, medicine, clothing, grants and aftercare. Photographer: A W Jordan. © From the collection of the RIC (TRURI-TRUwef-19).

The war soon started to exert financial pressure on the RIC as well. Not only had the cost of printing increased, but the Council felt it was their duty to economise. In consequence, papers due to be published in the 1916 edition of the journal were held back and the issue was confined to merely reports on formal proceedings. 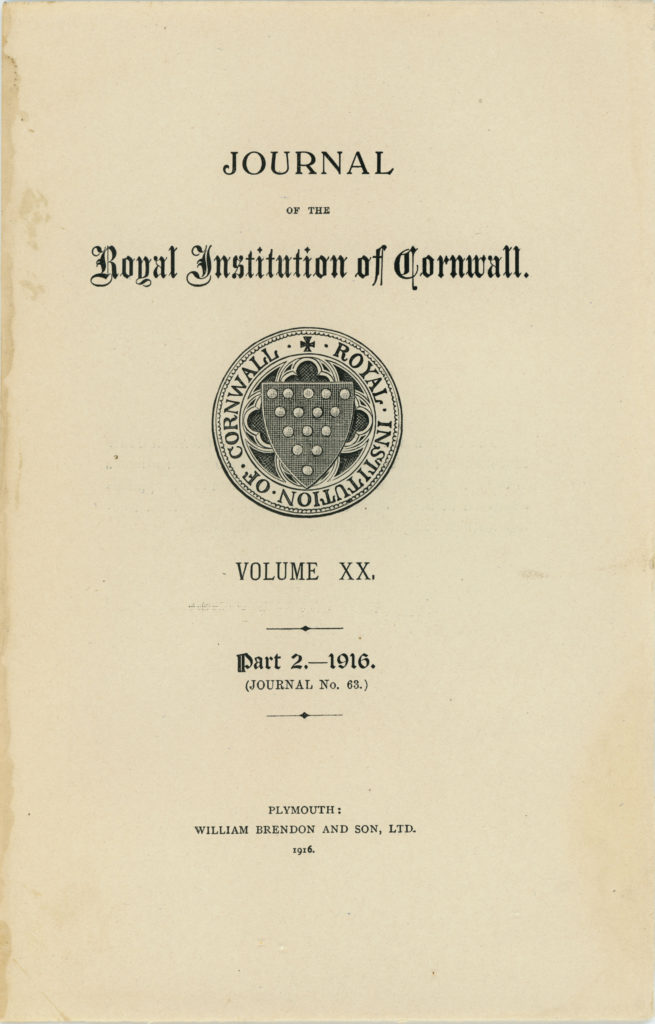 The front page of the 1916 issue of the Journal of the Royal Institution of Cornwall. © RIC.

Like many during the war, the RIC suffered great personal tragedy. The Council mourned the loss of Lieutenant Malcolm Stewart Blane, of the 5th Battalion of the Cameron Highlanders. He died for his country at the age of just twenty-two, only a few days after election to the RIC. He had recently taken his degree at Oxford, where he had distinguished himself in engineering science and Celtic studies.

In view of such horrors, the President’s Address of 1914 appears incredibly moving. The President asked:

“were museums and their teachings ever more needed than to-day?… it is our duty to see that the rising generation is so educated that, if ever again the war clouds gather, those who can help shall have the power of imagination so awakened that they shall be able to understand what is meant when the world cries aloud that on them depends the question whether the future shall be one of righteousness or devilry, of light or darkness… scholarship does little to advance the world unless and until it reaches the general mass of the people, and that, when it reaches them, it must not be cold and harsh and dry, but instinct with life and full of pure emotion”. 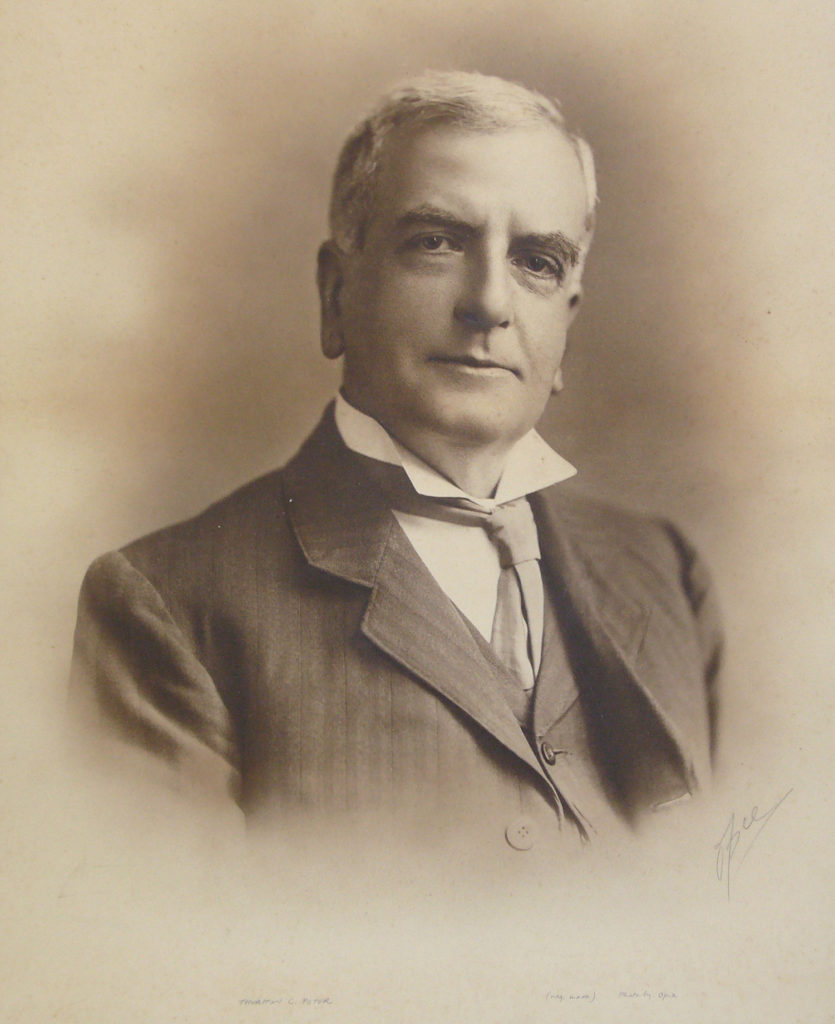 The potential for the museum to aid in the war effort is clearly seen in subsequent reports. Hardly a day passed without visits from wounded sailors and soldiers from the Royal Naval Auxiliary Hospital and the Royal Cornwall Infirmary, both in Truro.

Ultimately, the RIC persevered. The old museum was commandeered at short notice by the Army Council, and the remainder of the collections had to be transferred immediately to the new building. Notwithstanding of the difficult conditions, the task was accomplished without damage to a single object. 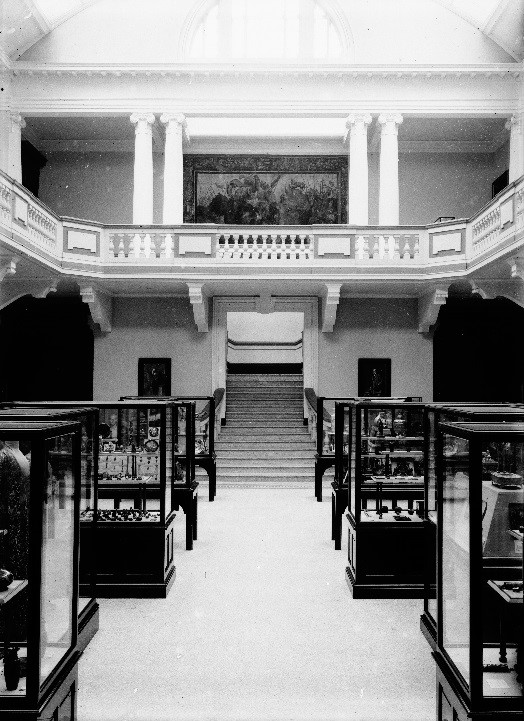 The Main Gallery of the Royal Cornwall Museum in 1919. Photographer: Canon H H Mills. © From the collection of the RIC (TRURI-TRUrcm-2).

Although 1918 was the RIC’s centenary and the new museum buildings were completed that year, it was felt that the time was not opportune for celebrations, and events were deferred until after the war in 1919.

Thus, on Wednesday 11th June, the 101st year of the RIC was marked by the opening of the County Museum and Art Gallery by the then Prince of Wales, Duke of Cornwall (later Edward VIII). Truro greeted the Duke decorated with garlands, flags and streamers, and over 600 guests attended the museum ceremony. It was described as a “fitting beginning” to the RIC’s second century. 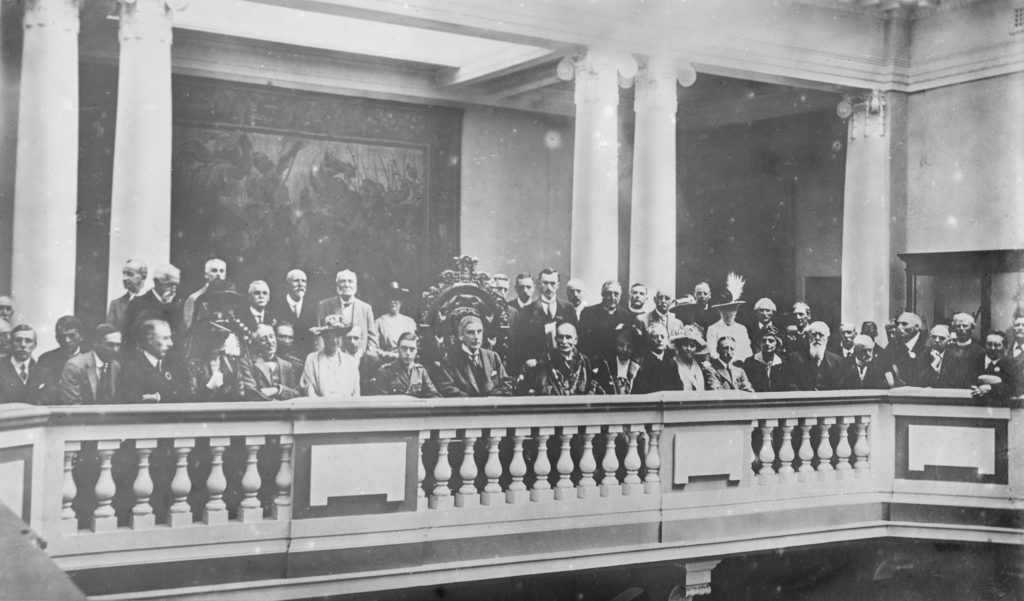 Group photograph taken at the opening ceremony of the museum. The Prince of Wales sits to the left of the centre, wearing the uniform of Commander in Chief of the Duke of Cornwall’s Light Infantry. Photographer: Opie Ltd. © From the collection of the RIC (TRURI-TRUrcm-5).

You can read a digitised copy of the 1914 President’s Address in full here.

For more about the Red Cross, please see the Messages from the Royal Cornwall Infirmary pages.

RIC archive images of the First World War can be found on Media Storehouse.